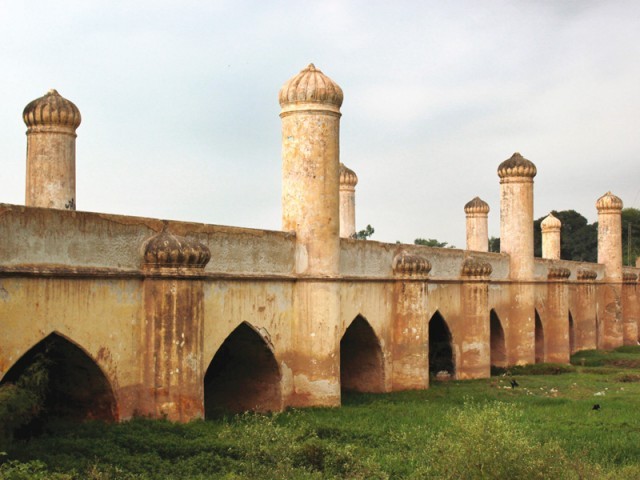 A Mughal-era construction probably built during Shah Jehan’s rule in 1629, the bridge is 100 yards long and six yards wide with six-foot tall pillars on each side. The pillars are topped with beautiful domes which add to the grandeur of the bridge. Two of the domes, however, have fallen off. As is typical of Mughal architecture, there are 12 arched tunnels or water ways running under the bridge.

The bridge is in considerably good condition, despite the fact that it has been there for more than three centuries and has not been preserved as a historical site. It is among the few Mughal monuments in the city of Peshawar. In his book, Peshawar: Past and Present, SM Jafar shows the original plaque with Emperor Shah Jehan’s name and details of the bridge on it, such as the date of construction.

One of the pillars used to have a plaque with details about the historic bridge, but it has been removed. Researcher Humayun Akhund said residents claimed the plaque was taken away by officials from the archeology department. He added that they had searched the department and found nothing. “If we had the plaque, we would be able to learn about the bridge’s history,” he said. “But since we do not have any historical documents or manuscripts, we don’t know much. The structure and design show that this was built in the Mughal period.”

According to researcher Muhammad Nawaz Khan, who has written about the history of Peshawar, many people believe the bridge was built by Karim Bakhsh Sethi, a philanthropist from Peshawar. There is, however, no proof. Khan added there was another bridge on the road between Chamkani village and GT Road which was constructed by Sethi. He claimed there used to be a mosque near the bridge but it doesn’t exist anymore.