Uniden­tified men kill three of a family in Mardan.
By Our Correspondents
Published: November 28, 2013
Tweet Email 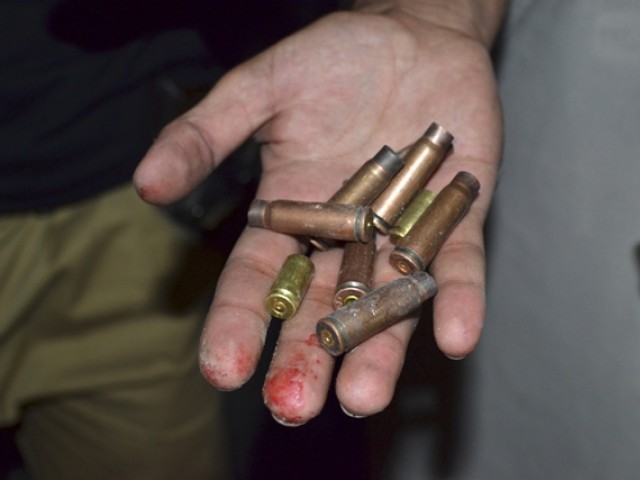 CHARSADDA / MARDAN: Four women were shot dead in Umaray, Charsadda, when a relative with a history of mental illness opened fire. Four others were also injured.

Khanmahi police officer Syed Rahman said the incident occurred around 12:30pm on Thursday. Jafar Shah told the police he was with his family in their house in Zahidabad when his son, Shehr Ayaz, barged in with an AK-47 and opened fire.

As a result, Zulfan Bibi, Gulsam Bibi, Ayesha and Gul Mena died on the spot while Shabana, Mehnaz, Mansoor and Zubair were injured. According to the father, Ayaz ran out of the house after firing.

When the neighbours heard gunshots, they rushed in and shifted the injured to the District Headquarters Hospital. They were referred to Lady Reading Hospital in Peshawar.

Rahman said they started a search operation but could not find Ayaz. “The entire area is in panic after the murders. A search is still underway,” asserted Rahman.

Three members of a family were killed and two others were injured by unidentified assailants in Takht Bhai tehsil of Mardan, said a police official.

Official Noshad Khan said around 4am on Thursday morning unidentified men broke into Abdul Wahab’s house in Amin Kallay and open fire at his family. Wahab’s wife Tasleema Bibi and daughter Neelam were killed on the spot and sons Riaz, Javaid Iqbal and Zeeshan were severely injured.

The official added the injured were rushed to a hospital but Zeeshan died on the way. A case was filed against the attackers. However, no one was nominated in the FIR.