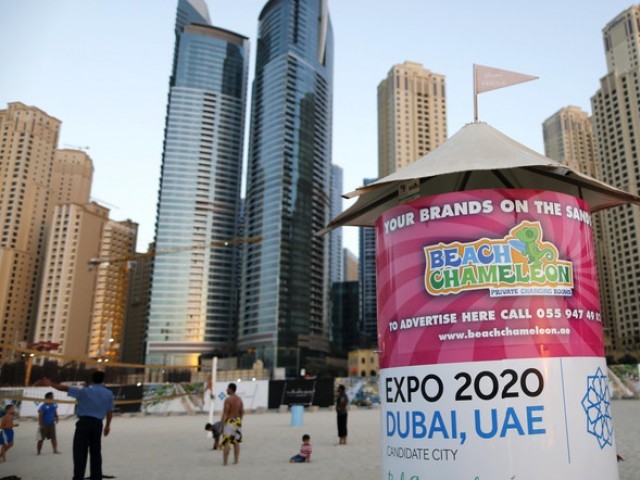 PARIS: Dubai on Wednesday won the right to host World Expo 2020, a six-month event that invites billions of dollars in investment, tourism and a moment in the global spotlight.

The glitzy Emirati city rode stiff challenge from Brazil’s Sao Paulo, the Turkish city of Izmir and the Russian city Ekaterinburg in a vote by the 168 members of the Paris-based Bureau International des Expositions.

We congratulate the nation,our president & all people in UAE on Dubai’s winning bid to host the greatest exhibition in the world #Expo2020

World Expos, which participating countries use to showcase technological prowess, culture and architecture, are held every five years for six months.

Dubai will be the first for Arab country to host the fair.

The UAE is proud to have been selected to host #Expo2020 in #Dubai under the theme 'Connecting Minds, Creating the Future'

The award was widely celebrated in Dubai with the world’s tallest building, the Burj Khalifa lighting up in fireworks as news was confirmed.

Milan will host the next one in 2015. Last year Astana, Kazakhstan, was awarded the 2017 world expo.

The fairs hold huge stakes for would-be hosts, which are prepared to spend billions on infrastructure, hotels, buildings and other preparations to attract millions of tourists.

With a successful bid for Dubai likely to trigger billions in new investment, concerns have emerged that hosting the fair could create a building boom that could turn to bust – as happened four year ago – if not handled carefully.

UAE Minister of State Reem al-Hashimy had said a few days ago that with its large expat population of “more than 200 nationalities,” the city hopes to attract “around 25 million visitors, 70 percent (of them) international” if it wins the bid.

This is in contrast to the Shanghai Expo 2010, where 90 percent of visitors were from China, said Hashimy.

Hashimy estimated the overall investment for the construction and servicing of the Expo site at about 6.5 billion euros ($8.8 billion).

She went on to say that hosting the Expo would create “227,000 jobs” over the next seven years and generate “27 billion euros” for the United Arab Emirates’ economy.

The minister seemed confident that, unlike Qatar, Dubai will not be the target of international criticism on conditions for its migrant workers, most of whom come from Asia.