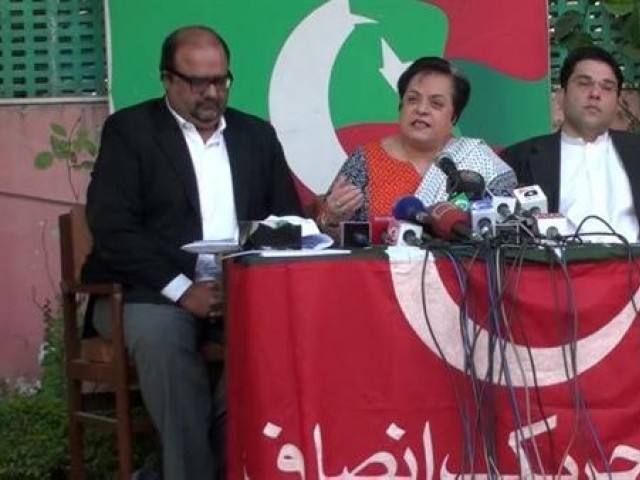 ISLAMABAD: The Pakistan Tehreek-e-Insaf (PTI) on Wednesday urged the police to include the US Central Intelligence Agency’s (CIA) director and a man whom the party claimed was the agency’s station chief in Pakistan, to be included as murder suspects in the November 21 drone strike in Hangu.

This was revealed by PTI’s central information secretary during a press conference in Islamabad on Wednesday. Mazari showed a letter that she had written to the Hangu police, requesting them to include CIA director John Brennan and his station chief in Pakistan in FIR 555 on the drone strike, which had initially named unknown persons as suspected perpetrators of the attack.

The November 21 attack, which militant sources said killed the Haqqanis’ spiritual leader along with five others, was unusual in that it was mounted outside Pakistan’s lawless tribal areas on the Afghan border.

The letter urged the police to include the two CIA officials in the FIR as suspects for murder and “waging war against Pakistan.”

It is rare for CIA operatives to be identified in public. The then-Islamabad station chief was forced to leave Pakistan in late 2010 when a Pakistani official admitted his name had been leaked.

In the nomination letter, the PTI accuses the agency chief in Pakistan of “running an illegal clandestine spying operation throughout Pakistan but specifically in K-P and annexed Tribal Areas.”

The station chief and his accomplices throw Global Positioning System (GPS) devices at houses or cars and the drone then strikes the target, PTI alleged.

PTI Chairman Imran Khan has stepped up his rhetoric since a drone attack killed the leader of the Pakistani Taliban Hakimullah Mehsud on November 1. He accused Washington of deliberately sabotaging fledgling efforts towards peace talks with the militants. He has urged the government to halt trucks travelling through Pakistan with supplies for Nato forces in Afghanistan. But the government has shown no appetite for the move, leaving PTI activists to take matters into their own hands.

In recent days PTI supporters armed with clubs have set up checkpoints on roads in Khyber Pakhtunkhwa and forcibly searched trucks for Nato supplies. The government criticises drone strikes as a violation of sovereignty and counterproductive to anti-terror efforts.

There hasn’t been any immediate repercussion of PTI’s protests and forceful blockade of Nato supplies in Islamabad’s ties with Washington which have improved in recent after lurching from crisis to crisis in 2011 and 2012.

Last month the US announced it would release $1.6 billion in aid and Washington’s support was seen as key in Pakistan securing a $6.7 billion rescue loan from the International Monetary Fund in September.