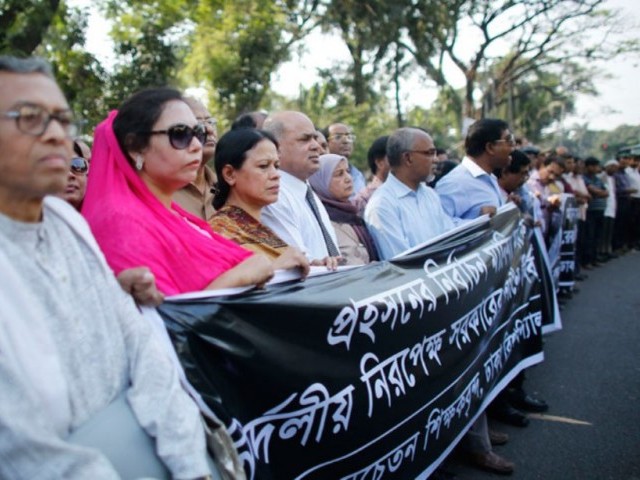 Teachers from the University of Dhaka, loyal to Bangladesh Nationalist Party (BNP), stand in a human chain during a nationwide protest in Dhaka. PHOTO: REUTERS

DHAKA: Bangladesh’s general election in early January could be postponed to accommodate opposition parties that are threatening to boycott the polls, the election commission said Wednesday.

“If there is consensus among the parties, the election date can be delayed to another date to make sure that all parties can participate in the polls,” Election Commissioner Md Shahnawaz told AFP.

The election commission had said on the night of November 25 that the election would be held on January 5, but the announcement has helped trigger a new bout of political violence in the volatile country.

A total of nine people have been killed in clashes between the security forces and opposition supporters in the last few days while the country has also been paralysed by a general strike.

The 48-hour shutdown, which began on November 26, has led to a complete halt to public transport and widespread closures of shops and government offices.

The main opposition Bangladesh Nationalist Party (BNP) and its allies have said they will not take part in the election unless Prime Minister Sheikh Hasina resigns and makes way for a neutral caretaker government which will oversee the contest.

Suicide bombers kill 14 in attacks on army bases near Baghdad