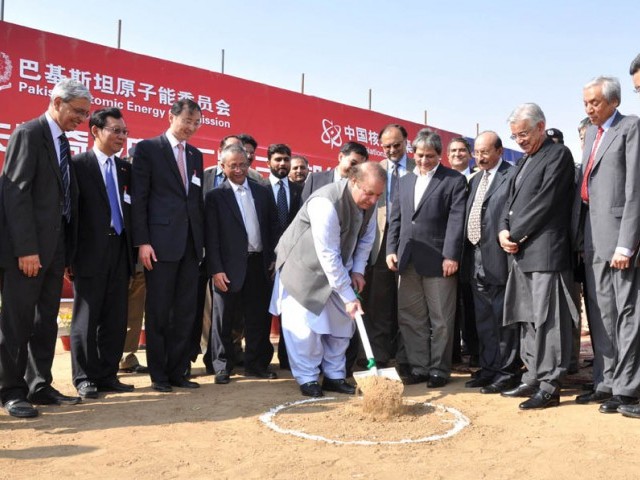 The 2,200-megawatt plant is to be built with Chinese technical assistance on the Arabian Sea coast at Paradise Point beach, 40 kilometres west of Karachi.

The government sees nuclear energy as a relatively low-cost solution to the problem of load-shedding that has blighted life in the country.

The prime minister termed the ground breaking of the Coastal Power Project K-2 and K-3 “a proud moment in the energy history of Pakistan”. “This is one of the first steps of our goal of racing towards a load-shedding-free Pakistan,” he told the audience at the site of the plant.

He said the project would take 72 months to complete. In the next few years, he said, he will be looking forward to laying a strong and solid foundation for the Nuclear Energy Vision 2050 that envisages nuclear power generation of about 40,000MW.

Pakistan already has three operational nuclear plants generating 740MW of power and has begun work on a fourth, in addition to the one launched on Tuesday.

The prime minister pledged to increase the nuclear-power generation capacity to 40,000MW in the long term as part of his energy plan.

The launch of the construction of this power plant is part of a string of projects, including wind energy generation of 2,500MW, CASA project that will produce 1,000MW and the Tarbela-V extension project.

A few kilometres further west of the new nuclear power project, an energy park is being built at Gaddani beach, Balochistan, with plans for 10 coal-fired power projects of 660MW each.

On the hydropower front, the government had decided to construct Diamer-Bhasha and Dasu dams simultaneously, besides building the Bunji dam. These dams have a power-generation capacity of 15,000MW. “We are also exploring further avenues to utilise our hydel capacity,” said the prime minister.

“I am grateful to the Chinese government for extending help and support to Pakistan in this hour of need,” he said, describing it as a momentous landmark in the history of Pak-China friendship and cooperation. “Our mutually beneficial collaboration is spread over a wide range of projects in all geographical terrains, from the heights of the Karakoram to the waters of the Arabian Sea.”

The World Nuclear Association has estimated the cost of the new project at nearly $10 billion.

As Pakistan is not a signatory to the Nuclear Non-Proliferation Treaty, it is excluded from the global trade in nuclear materials and technology and can rely only on China for help.

Meeting on law and order

Prime Minister Nawaz Sharif chaired the third meeting on law and order in Karachi in the last two-and-a-half months.

During the meeting, he was informed that around 9,000 suspects have been arrested so far, out of whom 3,000 are proclaimed offenders. The prime minister asked the Sindh chief minister and governor to enforce the Pakistan Protection Ordinance by registering cases against terrorists in the province.

PM Nawaz was also informed about criminals released on parole during Pervez Musharraf’s tenure. “Around 35 notorious criminals were released for a few days in 2003, but since then, all are at large,” officials said. He directed Sindh Chief Minister Qaim Ali Shah to start the re-investigation of the cases and devise a plan to arrest these suspects who, according to law enforcers, are the driving force behind the worsening law and order situation in Karachi.

Moreover, interior ministry officials disclosed to the premier that around 41 proxy prisoners are currently housed in Karachi’s jails. The interior secretary said, “These inmates have been sent to jails in lieu of notorious criminals involved in various criminal cases. No one had a clue until the records of prisoners were verified with NADRA assistance.”

Officials claim that the Sindh chief minister assured PM Nawaz that he would verify the facts through a high-level committee and share the report with the federal government.