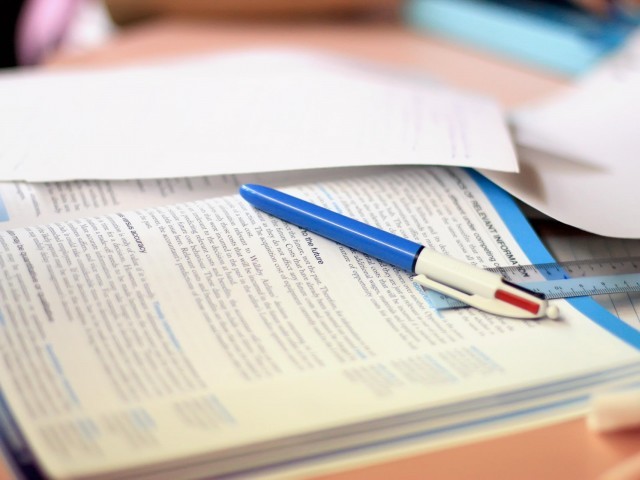 The SED, UNICEF will review the curriculum to identify objectionable content. PHOTO: FILE

“Do we have peace in our society? Does our curriculum support peace? What are politicians doing about maintaining peace in the country? Who breaks peace? And more importantly, what is peace?” Young scouts and girl guides discussed these questions with parliamentarians at a dialogue held on Monday to discuss how education can promote peace and reconciliation.

The dialogue was third of a series organised by the United Nations Girls’ Education Initiative (UNGEI) under its Promoting Peace and Reconciliation through Education project, in collaboration with the School Education Department (SED) and the United Nations Children’s Fund (UNICEF). The fourth dialogue session will be held in Rajanpur. Earlier sessions have been held in Bahalwapur and Dera Ghazi Khan.

Provincial Assembly Member Sardar Waqas Hassan Mokal opened his talk by providing his definition of peace. “It is an environment that allows individuals to achieve their potential,” he said, “Unfortunately we in Pakistan do not have that environment.”

MPA Faiza Ahmed Malik said lack of tolerance over the decades had removed social equality and peace from the society. Not only were laws to protect citizens missing, she said, the flawed legal system made matters even worse.

MPA Alia Aftab said, “The youth imitate what they witness around them. Young children are impressionable and act in accord with what they see around them. This thought should make us work hard to build a better society.”

Pointing at the lack of educational opportunities in rural areas, MPA Anees Qureshi said the growing disparity was responsible for the rising crime rate. “A large segment of uneducated and unemployed people is tempted to break the law,” he said, “We need to make life meaningful for them.”

MPA Syed Tariq Yaqoob Rizvi was of the view that the society was plagued with sectarian hatred. “The Rawalpindi incident during Ashura is an example,” he said. MPA Ayesha Javed said politicians had largely failed to fulfill their responsibilities. Despite the growing social and economic injustice in the society, she said, politicians had resorted to point scoring instead of setting decent priorities.

MPA Sadia Sohail said the politicians could not freely enact laws or monitor government departments due to resistance from a strong bureaucracy. “The control lies with the bureaucracy, not politicians… here is where the system needs to be corrected,” she said.

The dialogue series has been organised to support the Universal Primary and Secondary Education campaign.

“We hope to set a precedent so that such measures can be taken to ensure the promotion of peace through education,” SED Planning and Budget Additional Secretary Rana Hassan Akhtar said. “Such dialogues make it possible for us to sit together and determine the types of prejudices that plague our education systems,” he said.

Akhtar said the UNICEF and the SED would work together to review the curriculum to address concerns regarding ‘objectionable content’ in curriculum.

“There would be a word by word analysis of the books to determine where we stand and what we can do to ensure that the curricula promote peace,” she said.

Qizilbash said they were also working to bring the youth to the mainstream to promote peace and social cohesion.

She said it would incorporate components of the Punjab Youth Policy and help create an environment where the youth could actively work for promotion of peace.

In January, the Parliamentarians’ Caucus, established to review education related policies, will hold a dialogue on the project.

SED Deputy Secretary Qaiser Rasheed said recommendations regarding the curriculum would be sent to the Punjab Curriculum Authority for deliberations and implementation.  He said as many as 80 books would be reviewed in two years.

Rasheed said the SED would also work towards removing disparity in the education system, as it led to growing social frustration.

The department is currently working on providing missing facilities at government schools across the province, he said. A significant chunk of the fund would be directed towards 11 districts in the south of Punjab. “We have to make government schools attractive and conducive for learning,” he said.