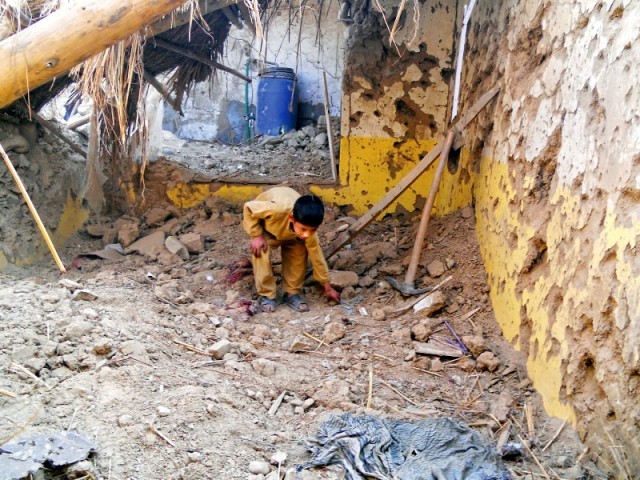 A child sifts through rubble at the seminary destroyed in the drone strike in Hangu. PHOTO: AFP

A senior leader of the Haqqani network and five others were killed on Thursday when a US drone fired missiles on a seminary in Thal tehsil in Hangu — in the first such strike on the settled areas of Khyber-Pakhtunkhwa.

At least eight people were also injured in the attack.

A district government official said on the condition of anonymity that US drones fired four missiles on the Madrassah Miftakhul Quran at around 4:30am in which a Haqqani Group Taliban commander and spiritual leader, Maulvi Ahmad Jan, was killed.

Several senior Haqqani sources confirmed the death of Maulana Jan. An Afghan Taliban source said the five others killed in the strike were also militants. Two local security officials identified two of the dead as Jan and Mufti Hameedullah – both members of the Haqqani Network, a Taliban affiliate.

Others killed in the strike were identified as Maulvi Abdur Rahman, a resident of Doaba, Hangu, Maulvi Abdullah, a local of Sadda, Kurram Agency, Karim, and Gul Marjan, hailing from the Paktika province of Afghanistan.

Thursday’s attack comes a day after PM’s Adviser on Foreign Affairs Sartaj Aziz claimed that the US assured Pakistan of temporarily calling off the controversial drone campaign if the Taliban sat across the table with government negotiators for peace talks.

It was the first time a US drone hit a district inside K-P. According to the Bureau of Investigative Journalism, three drone strikes have previously hit outside of Fata in Frontier Region Bannu since 2004. The frontier regions are a ‘buffer’ area between the tribal regions and the ‘settled’ regions that are under provincial control. The last such attack took place in Jani Khel in March 2009.

The drone strike was also the first in Pakistan since Pakistani Taliban chief Hakimullah Mehsud was killed in a similar strike in the North Waziristan on November 1.

Islamabad strongly condemned the latest drone strike in Hangu, reiterating that such attacks are a violation of its sovereignty and territorial integrity. There is an across-the-board consensus in Pakistan that these drone strikes must end,” said the foreign ministry spokesperson, Aizaz Ahmed Chaudhry, said in a statement.

He said the government had been raising its concern over the drone strikes with US administration and the United Nations. “The prime minister during his recent visit to the United States had raised the issue with President Obama and other senior US leaders,” he maintained.

He said that Pakistan had consistently argued that the drone strikes are counterproductive and entail the loss of innocent civilian lives.

A US official, cited by the Washington Post, disputed Pakistan’s version that the strike was aimed at a madrassa. Instead, the official said, the CIA fired on a compound associated with the Haqqani Network. The official acknowledged that a madrassa was in the vicinity of the strike, but said that the religious facility was not damaged.

Bursting at the seams: Out of house, home and prison cell