Had the PM strict­ly told Americ­a that drone strike­s must stop, they would never conduc­t such attack­s: Imran
By Mariam Essa
Published: November 21, 2013
Tweet Email 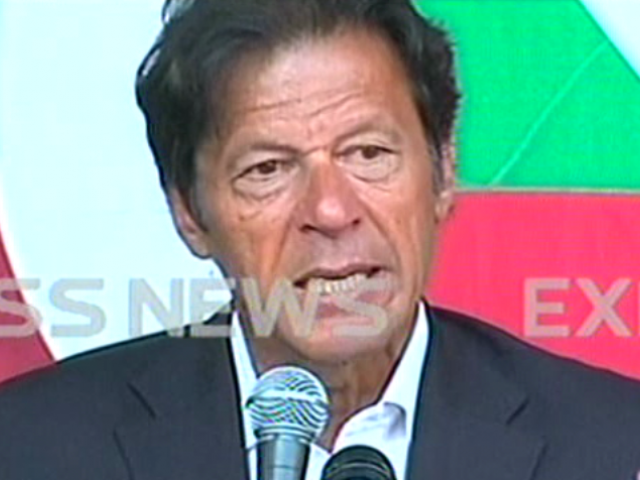 Express News screengrab of Imran Khan speaking at a press conference in Islamabad.

He invited the people of Khyber-Pakhtunkhwa (K-P) to join the rally on Saturday against the first drone strike in K-P, in which five people were killed and another three others were injured in Tal area of Hangu.

Imran, whose party is in power in K-P, questioned why Nawaz has not made a statement on the recent drone strike yet, saying that as the leader of the country he should have been the first to speak up.

He told Nawaz not to “play on both sides of the wicket,” adding that he should give up his “dual policy” of telling the US one thing and Pakistan another.

“If the prime minister strictly told [America] that drone attacks must stop, they would never conduct such attacks,” he said.

“If they attacked Hangu then what will stop them from attacking any other place if they suspect terrorist activity there?” the PTI chairman added, stressing that America could strike based on suspected terrorist attacks, not certain ones.

“Are we America’s tissue, that they just use us and then throw us away?” Imran exclaimed.

He questioned why America is “fighting on our land” if they are our allies. He added that America must not be afraid of Pakistan’s response if they are willing to do this the day after Adviser to the Prime Minister on Foreign Affairs Sartaj Aziz’s statement.

Yesterday, Sartaj Aziz had stated that America had assured Pakistan that drone strikes will not be carried out during talks with the Taliban. He had quoted Obama as saying that America does not want 70 percent of Pakistanis to hate it.

“The Pakistani government does not have the strength to take a stand against them”, alleged Imran.

“We will show them that there are people in Pakistan who are not willing to tolerate these attacks”, he added.

When asked about the repercussions against standing up to the US, Imran said the only disadvantage would be that we get fewer loans and less money from them.

Saying that the rally will be “historical,” Imran remarked that the K-P government will announce their plans to “block Nato supplies from going through the province until they [America] swear that drone strikes will stop.”

Until now, blocking Nato supplies was the political party’s stance, but after Saturday’s announcement, the whole province will stand against it.

Imran said that “whoever talks about dialogues with the Taliban, is called pro-Taliban.”

He added that people who use terms like pro-Taliban also promote peace talks with India, questioning whether that makes them pro-India.

We approve of dialogue with India to promote peace but there is a double standard that labels PTI as pro-Taliban but does not term those who support India as pro-Modi or pro-India, Imran added.

Imran said “[PTI] were given votes for peace… we came to this country to reduce war, not aid it.”