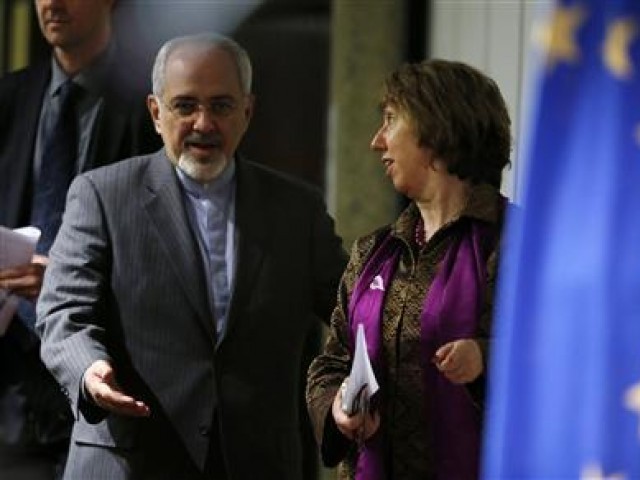 GENEVA: World powers resumed efforts to clinch a preliminary deal to curb Iran’s nuclear programme at talks in Geneva on Wednesday, with Russia and Britain confident that agreement can be reached.

Seeking to end a long standoff and head off the risk of a wider Middle East war, the United States, Russia, China, France, Britain and Germany came close to winning concessions from Iran on its nuclear work in return for some sanctions relief at negotiations earlier this month.

Policymakers from the six have since said that an interim accord on confidence-building steps could finally be within reach, despite warnings from diplomats that differences remain and could still prevent an agreement.

British Foreign Secretary William Hague said the remaining differences are narrow and a historic deal is within reach.

“It is the best chance for a long time to make progress on one of the gravest problems in foreign policy,” Hague told a news conference during a visit to Istanbul.

Russian Foreign Minister Sergei Lavrov said earlier: “We hope the efforts that are being made will be crowned with success at the meeting that opens today in Geneva.”

Iranian Supreme Leader Ayatollah Ali Khamenei said Tehran would not step back from its nuclear rights and he had set “red lines” for his negotiators in Geneva. But Tehran wanted friendly ties with all countries.

“We want to have friendly relations with all nations and peoples. The Islamic system isn’t even hostile to the nation of America, although with regards to Iran and the Islamic system, the American government is arrogant, malicious and vindictive,” Khamenei said, according to his official website.

Khamenei also criticised France, which had spoken against the deal as proposed earlier, for “succumbing to the United States” and “kneeling before the Israeli regime.” France said the comments were unacceptable.

Israeli Prime Minister Benjamin Netanyahu flew to Russia on Wednesday to appeal for tougher terms in any accord with Iran after failing to convince the United States that world powers are pursuing a bad deal.

Israel, thought to have the Middle East’s only nuclear arsenal, sees a nuclear-armed Iran as a mortal threat and wants its uranium enrichment capabilities dismantled and its enriched uranium removed.

The last meeting with the six powers stumbled over Iran’s insistence that its “right” to enrich uranium be recognised, and disagreement over its work on a heavy-water reactor near Arak, which could yield plutonium for atomic bombs once it becomes operational.

Iranian Foreign Minister Mohammad Javad Zarif has since indicated a way around the first sticking point, saying Tehran has the right to refine uranium but is not insisting others recognise that right.

A UN report last week showed Iran had stopped expanding its enrichment of uranium and had not added major new components at Arak since August, when moderate Hassan Rouhani replaced hardliner Mahmoud Ahmadinejad as president.

Nuclear analyst Ali Vaez of the International Crisis Group think-tank said the “body language” showed that the sides were ready for a deal, pointing to Iran slowing its nuclear push and Washington refraining, so far, from imposing more sanctions.

“(They) have demonstrated that they are looking to transform stumbling blocks into stepping stones,” Vaez said.

Zarif, Tehran’s chief nuclear negotiator, said on the eve of the meeting there was “every possibility” of a successful conclusion provided there was good faith and the political will among all involved to resolve problems.

US President Barack Obama sounded a more cautious note on Tuesday, saying it was unclear whether the world powers and Iran will be able to reach an agreement soon.

American lawmakers urged the Obama administration on Tuesday to take a tougher line with Iran.

The talks were expected to resume with a meeting between Zarif and European Union foreign policy chief Catherine Ashton, who coordinates contacts with Iran on behalf of the powers.

After years of confrontation, a shift towards meaningful diplomacy between Iran and the world powers began after the June election of Rouhani on a platform to relieve the Islamic Republic’s increasing international isolation and get sanctions strangling its oil-dependent economy lifted.

Rouhani wants to move quickly: Western sanctions have reduced Iran’s daily oil export revenue by 60 percent since 2011 and caused its currency to collapse.

But diplomats say Iran has so far refused to meet all of the powers’ demands. They include suspending enrichment of uranium to 20 percent fissile purity – a significant advance toward the threshold for bomb fuel – as well as limiting its enrichment capacity and mothballing the Arak reactor project.

The Iranian assets that would be unfrozen as part of any deal this week would amount to less than $10 billion, US national security adviser Susan Rice told CNN.

Western diplomats have kept much of the details of the proposed deal under wraps but said Iran would not win relief from the most painful sanctions on oil trade and banking that many believe finally forced into serious negotiations.

Under an initial deal the OPEC producer is likely to regain access to precious metals markets and trade in petrochemicals, an important source of export income, and could see the release of some of its oil revenues frozen in oversees accounts.

If an agreement is struck in the coming days, it is intended to be the first step on the road towards a broader settlement that would avert the threat a new Middle East war.