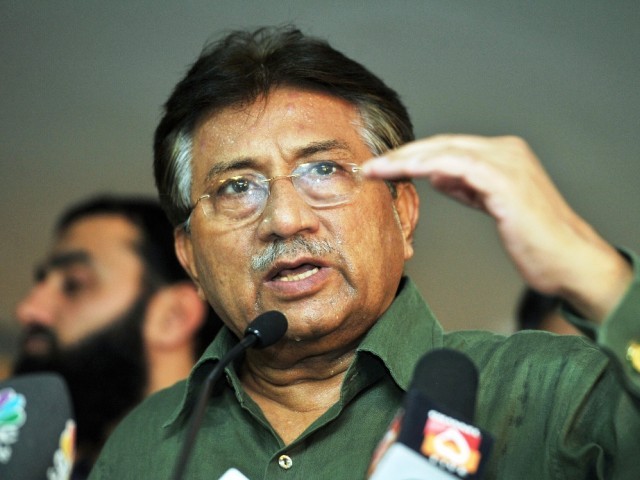 The All Pakistan Muslim League (APML), the political party of Pervez Musharraf, says that the former military ruler will face the charges in the court and prove his innocence. On the other hand, opposition parties have termed the government’s decision to invoke Article 6 against Musharraf a “tactic to divert public attention from sectarian unrest”.

“Pervez Musharraf returned to Pakistan to face the allegations against him and he has full confidence in the country’s judicial system,” APML Secretary Information Asia Ishaq told The Express Tribune.

She said her party knew that the government would open the case at any stage to victimise the former president and to conceal its incompetence, which resulted in the Rawalpindi incident.

PPP Information Secretary Qamer Zaman Kaira questioned the timing of the government’s move. “Choosing this time to initiate a treason case against Musharraf seems to be a tactic to divert public attention from the current chaos,” he told The Express Tribune.

He said the government should come up with facts instead of taking superficial measures to cover up the Rawalpindi tragedy. Kaira criticised the interior minister for not answering queries related to the burning issue of sectarian strife at his press conference.

“If the government is really interested in punishing Gen Musharraf, then it should try him for the 1999 coupe when he toppled a democratically elected government and abrogated the Constitution,” he said.

PTI senior leader Shah Mehmood Qureshi said his party was surprised by the timing the government chose to initiate the treason case. “Why the government took up this issue at this time when the entire nation is in a state on shock over sectarian violence in Rawalpindi,” he asked.

He said his party supported initiating a treason case against the former dictator, but it should have been done earlier or some time later.

MQM senior leader Haider Abbas Rizvi said that his party would present its reaction over the issue on Monday. “Without discussing the legal and political aspects of the case at party forums, we cannot comment on it,” said Rizvi.

ANP Senator Zahid Khan said apparently the government was under serious pressure from internal and external forces. “That is why it has referred the issue again to the SC, apparently to gain time so that Musharraf can leave the country,” he said.

He added that there was no need to refer the case to the SC as it was the government’s prerogative to constitute a trial court. The ANP leader, however, welcomed initiating the treason case against Musharraf.

Commenting on the issue, Awami Muslim League (AML) chief Sheikh Rashid Ahmed said the government could not single out Musharraf for treason trial, which had to start from October 12, 1999 rather from November 3, 2007.