Say some of the import­ers had starte­d cancel­ling the orders.
By Our Correspondent
Published: November 18, 2013
Tweet Email 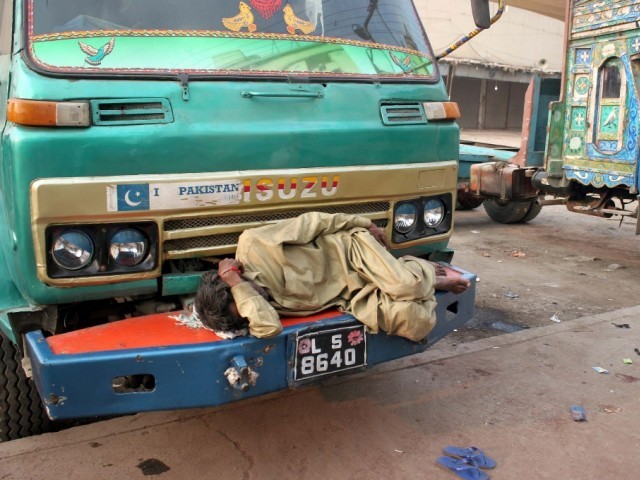 Truck driver is sleeping due to unemployment during strike of goods transporters association, near Fishery. PHOTO: PPI

FAISALABAD: The Pakistan Textile Exporters Association (PTEA) on Sunday welcomed the goods transporters’ decision to end their 10-day strike. Transporters had been on a strike against increase in incidents of theft, extortion, and frequent fining by Motorway Police. The strike was called off after talks with the government.

PTEA Chairman Sheikh Ilyas Mahmood and Vice Chairman Adil Tahir said the strike at Karachi port had delayed inland supplies and export consignments and caused billions of rupees loss to exporters. It had cut Pakistan’s traders from the rest of the world as over 20,000 loaded containers had been stuck at seaports, dry ports and at industrial units across the country for 10 days, they said.

Mahmood said the industry had also been facing shortage of raw materials for goods that had to be exported to Europe and other countries for Christmas and New Year.

He said had the strike gone one, economic activities would have come to a halt leading to closure of industrial units.

Tahir praised the government for talking with the transporters and solving the issue on war footing. He said some of the foreign buyers had started cancelling the orders.

PTEA office bearers urged that the government should adopt measures to avoid such types of strikes in future.