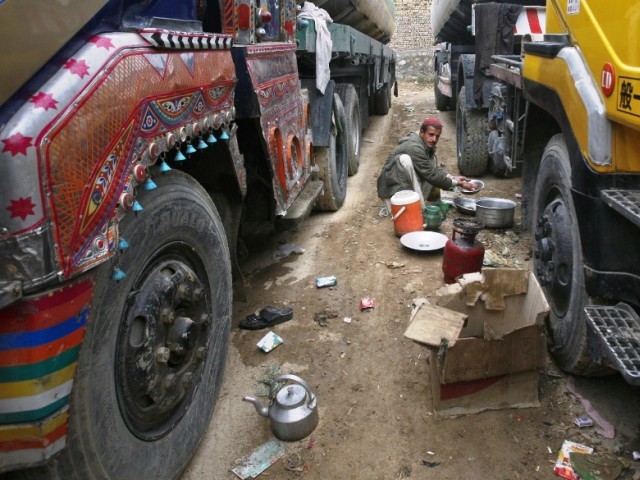 The strike has had a major impact on the cargo shipment at the city’s ports as truckers refuse to handle any. PHOTO: REUTERS/ FILE

The goods transporters’ strike, against the government’s failure to address their concerns, has entered the 11th day without any serious breakthrough. The United Goods Transporters Alliance (UGTA), the main representative body of goods transporters in the country, has been on strike since November 7 to protest the increasing incidents of theft, extortion, increase in income tax and heavy fines by the motorway police.

The UGTA has set up a protest camp at the Mauripur truck stand where leaders of the association address the transporters. On Saturday, members of the UGTA held a protest demonstration at the truck stand, chanting slogans against the government’s inability to provide them with security on both the roads and the truck stands. The strike has had a major impact on the cargo shipment at the city’s ports as truckers refuse to handle any cargo inside or outside the ports.

UGTA’s press secretary, Fazal Manan Jadoon, told The Express Tribune that the government had accepted their demands in the last strike but failed to meet them. “This time, we want the government to deliver what was promised to us,” said Jadoon, adding that the minister for state and commerce, Senator Abbas Khan Afridi, had assured them that their concerns would be addressed without further delay.

Jadoon also said that the federal minister for ports and shipping, Senator Kamran Michael, had also contacted them for a meeting. He added that the strike was costing them a loss of Rs3 billion each day as around 760,000 vehicles owned by members of the association were on a standstill.

Meanwhile, the Karachi Port Trust’s assistant public relations officer, Shariq Farooqui, told The Express Tribune that the strike had no monetary effect on the port because its cargo handling was not affected.

“We have backup stocking spaces for containers and are handling the containers as per routine,” said Farooqui. He added, however, that the strike had affected the businesses of their consumers who dealt in imports and exports.