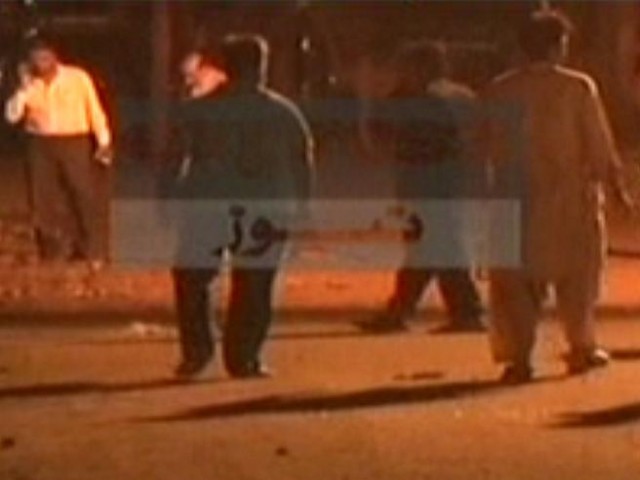 The bomb blasts took place outside an imambargah in the city’s North Nazimabad locality where a gathering of mourners had concluded an hour ago. PHOTO: EXPRESS NEWS screenshot

At least 12 people including law enforcers and media personnel got injured in bomb blasts and a grenade attack outside two imambargahs in Karachi.

The bomb blasts took place outside an imambargah in the city’s North Nazimabad locality where a gathering of mourners had concluded an hour ago.

Police and eyewitnesses told The Express Tribune that the first bomb, detonated at around 10pm, was a remote controlled device planted close to a vehicle owned by the Imambargah’s caretaker, whose young son and a bystander were among the wounded.

“The explosion took place one hour after a Majlis,” said the imambargah’s caretaker, Khalid Hussain.

Extra contingent of law enforcers including police and Rangers reached the site and cordoned off the area. The media teams also rushed to the place to cover the event.

However as the law enforcers and media-men were about to leave the place at around 11pm, another blast of similar intensity took place some 10 feet away from the site of the first one.

As a result, two policemen, a Ranger’s operative and media representative sustained injuries. The injured were also immediately rushed to Abbasi Shaheed Hospital, were the condition of some of them was reported to be critical.

Following the blast the law enforcing agencies mounted a search operation and rounded up half a dozen suspects.

The third incident took place at around midnight outside another Shia mosque in North Karachi where armed terrorists lobbed hand grenade. Two policemen sustained injuries as a result and were taken to the hospital.

“Militant or sectarian elements are likely behind the attack…it was aimed to create harassment,” said DSP Iftikhar Hussain.

Taking notice of the incident, Sindh Governor Dr Ishratul Ebad and Chief Minister Qaim Ali Shah ordered the inspector general of police and director general of the Rangers to submit their initial investigation report within 24 hours.

Public transport: Qingqis to be modified based on NED study