At presen­t, the mill is runnin­g at only 3% of produc­tion capaci­ty.
By Farhan Zaheer / Creative: Munira Abbas
Published: November 10, 2013
Tweet Email 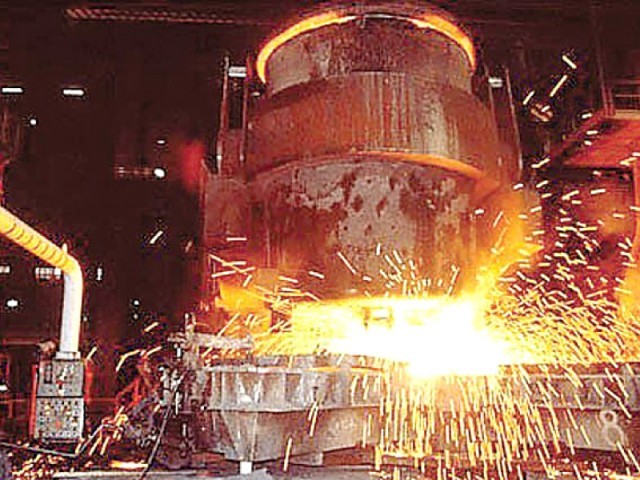 At present, the biggest concern for PSM is immediate injection of a huge amount of money, with some experts putting it at Rs20 billion, to purchase raw material to be able to stand on its feet again. PHOTO: FILE

Pakistan Steel Mills (PSM), the biggest and only integrated steel mill in Pakistan, is going through its worst financial and production crisis in its history of three decades.

The mill has not only accumulated huge losses, especially in the last five years, it is also running at an embarrassingly low production capacity of just 3% – the lowest capacity utilisation in 31 years.

PSM, which is also the largest industrial complex in the country, has a huge workforce of over 16,000 employees – one of the core reasons why it is called a white elephant. But for some experts overstaffing – many of the employees have been appointed on political grounds – is not the biggest problem, it is something else.

At present, the biggest concern for the national giant is immediate injection of a huge amount of money, with some experts putting it at Rs20 billion, to purchase raw material to be able to stand on its feet again. However, the government, struggling to improve affairs at a number of loss-making enterprises, is finding it hard to pump money and is only releasing it in phases, with no significant improvement in the situation.

In September this year, the PML-N government decided to bail PSM out with a Rs2.9 billion package. Though most of the money has been provided, it has only gone to meet salary expenses of employees and to purchase some basic raw material.

This bailout package is too small compared to the four packages that the previous government approved in its tenure. The last administration injected over Rs40 billion in four phases, but since the money was provided in phases, it did not bring any positive change in the financial health of PSM.

“Pakistan Steel Mills is still manageable. Those who are saying that it is a hopeless case do not know much about the industrial complex,” said Haq Nawaz Akhtar, former PSM chairman.

“The mill should run at all cost, whether the government runs it under a private management or it is carefully privatised at certain terms,” said Akhtar, one of the longest serving PSM chairmen, who remained at the helm of affairs from 1981-1986. Before becoming chairman, Akhtar served PSM as a finance director from 1974-78.

Background interviews with people who had run PSM in its golden years suggest that vested interests have always thrived at the expense of this national asset. They blame successive managements of the mill for being incompetent.

“I think corruption is one of the few sins in which some heads of PSM were involved. Some of these have faced trials in the past,” said one of the top officials of PSM, but asked not to be named.

“What is more dangerous is criminal negligence and mismanagement and this is what drowned this important industrial complex,” he said.

Running at just 3% capacity, the mill is booking losses of at least Rs2 billion per month. “It can reach break-even at 70-75% capacity and to make profit, it needs to run at 80-85%, which looks impossible unless it buys raw material in big quantities,” the official said.

“One of the biggest reasons why PSM has gradually weakened is that the organisation faces a dearth of people who could replace the top management once they retire,” PSM’s former director Irshad Ali Rizvi told The Express Tribune. He retired in 2007.

Akhtar believes that the government should put in place a private management, preferably comprising professionals who have prior experience to save the steel mill. This management will have to undertake three tasks – revival of the mill, expansion in production capacity and support the downstream steel industry operating close to the PSM premises.

A look back at history of PSM