‘Govt taking measur­es to preven­t flash floods for the next hundre­d years’.
By Our Correspondent
Published: November 10, 2013
Tweet Email 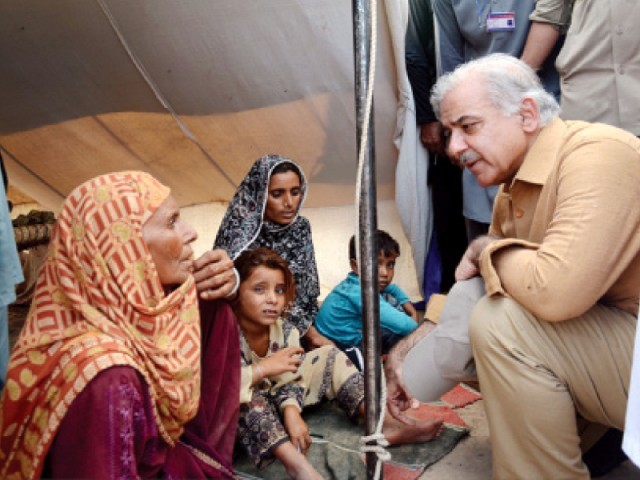 ‘Govt taking measures to prevent flash floods for the next hundred years’.

“Rajanpur will become the Lahore of south Punjab in the next five years,” Chief Minister Shahbaz Sharif said at a ceremony to distribute Rs530 million among the flood victims on Saturday.

The chief minister said that the financial assistance would help farmers revive agricultural activity in the region. “We have devised a comprehensive strategy for the rehabilitation of the area,” Sharif said.

He encouraged the recipients to inform him of any instances of negligence, corruption or maladministration in the distribution of cheques. “If the process of distribution takes longer than four days, I will suspend the administration of Rajanpur,” he said.

The chief minister also spoke about the government’s efforts to develop Rajanpur. He said five model villages had been built, dykes and embankments had been repaired and several development projects had been initiated during the last five years.

He announced a Rs1 million assistance for the Rajanpur Press Club.

Sharif said the government had devised a plan to prevent flash floods in the district “for the next hundred years”. He said the project would be completed in a transparent manner.

As many as 21,000 people representing 164,098 flood victims will collect the cheques in four days, starting Saturday.

Small-scale farmers will be given Rs4,500 per acre to compensate for the loss of their crops.

RPO Laleka told The Express Tribune that the stage and dais built for the chief minister had been bulletproof. Intelligence agencies and the Special Branch had cautioned them against a possible terrorist attack by the Tehreek-i-Taliban, he said.

The police had taken strict measures to ensure security for the chief minister, he said. Details of the security plan had been kept confidential till Sharif’s arrival at the sports stadium.

The police had requested the chief minister to remain in the helicopter for 20 minutes after it arrived in Rajanpur.