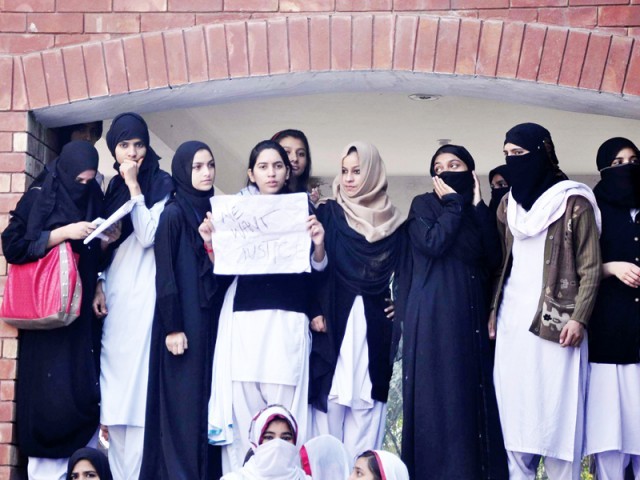 The student is in a stable condition at the Lahore General Hospital.m PHOTO: SHAFIQ MALIK/EXPRESS

Hundreds of students of Government Islamia College for Women, Cooper Road, left their classrooms on Friday to protest the falsely rumoured death of one of the students blamed on the college administration’s ‘negligence’ in providing her timely medical care.

Maham Malik, a freshman BS student at the college, had fainted at the campus on Thursday. She was taken to the Emergency Ward at Ganga Ram Hospital.

On Friday, there was a rumour that she had died. Some students blamed the college administration for it, saying she was not taken to the hospital on time.

Hundreds of students then joined a demonstration on the college premises at around 9am. They later moved the protest to Cooper Road. They demanded the principal’s resignation and chanted ‘we want justice’.

Principal Farzana Shaheen told The Express Tribune that the students had been misinformed about Malik’s condition. “We tried to tell the students that her condition was stable. They had gotten so emotional that they did not believe us,” she said.

Shaheen said that she was informed about the medical emergency on Thursday afternoon at 1:30pm. She was told that a student needed to be sent to a hospital and her brother had arrived to take her.  “I provided a car to take her to the hospital in as soon as I found out,” she said, “But it was our duty to verify who was picking her up.”

Shaheen said it was the college’s duty to verify the identity of those who came to pick up students. “We have been in regular contact with her family. We also sent staff members to stay with her at the hospital till her parents arrived,” she said.

She denied negligence on her part. She said there was a nurse at the college but they were in the process of upgrading the nursing staff. She said two teachers who had been in the classroom where Malik fainted had been dismissed from service for their failure to inform her family immediately. [No independent confirmation was available in this regard]

Maria Ghayas, one of the protesters, told The Express Tribune that some students of Intermediate Part 2 had told them that Malik had passed away at the hospital. “We became furious because we had seen her brother wait for a long time before he could take her to the hospital…So we decided to protest. Somebody informed the media … before we knew it the entire college was out protesting,” she said.

Most of the students dispersed at around the time for Friday prayers.

Racecourse Circle women’s police station DSP Fehmida Yasmeen said the protest had been peaceful. “The students were only registering their protest based on information that happened to be incorrect,” she said. No complaint was filed against them, she said.

After the protesters dispersed, the college administration arranged for two students to visit Malik at the hospital.

Sania Batool, a lecturer at the computer science department, and another staff member accompanied them.

“We wanted to show them that Malik was fine and in good hands,” Batool said, “Sentiments were running high and we wanted to avoid further confrontation.”

Ghayas was one of the students taken to the hospital. “Malik is fine now,” she said, “We were concerned and didn’t believe our teachers at first but now we have seen that she is alright.”

Malik’s brother, Ahmed Nadeem, accused the college administration of failing to provide prompt medical treatment. “What were they waiting for?” he said, “They should have immediately taken her to a hospital.”

“When I reached the campus, I was not allowed to immediately take my sister to the hospital. I had to wait for almost half an hour for verification,” he said, “I became very frustrated and forced my way into the room she was kept in.” By that time, he said, the college had arranged for a car to take her to a hospital.

Nadeem said her condition was no longer critical.

LGH Emergency Director Munawwar Ali said that Malik was being treated by the head of neurosurgery department, Prof Anjum Habib Vohra. “She is no longer critical … we are monitoring her progress closely,” Dr Ali said.

He said that Malik had had an epileptic fit and was unconscious when she had arrived at the hospital. She was now semi-conscious, he said. Her family had told doctors that she had a history of epilepsy, Dr Ali said.

A press briefing by Prof Vohra regarding Malik’s condition is scheduled for Saturday (today) at 11am.