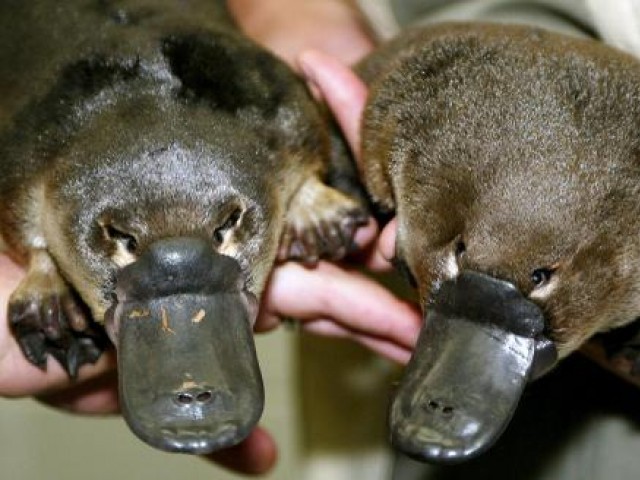 The world's first platypus twin puggles born in captivity are shown together for the first time during a full health check at Taronga Zoo's veterinary clinic in Sydney, 28 March 2003. PHOTO: AFP

SYDNEY: Thanks to a large ancient tooth, an Australian university student has filled in an evolutionary gap with a giant carnivorous platypus that became extinct at least 5 million years ago.

Before the discovery, fossil records suggested only one species of platypus inhabited the Earth at any one time, with the creatures becoming smaller and the size of their teeth reducing through time.

“A new platypus species, even one that is highly incomplete, is a very important aid in developing understanding about these fascinating mammals,” palaeontology student Rebecca Pian said in a statement.

Pian was working on a collection of fossil deposits from the Riversleigh World Heritage Area in northern Australia when she discovered the species through a highly distinctive oversized tooth. Details will be published this month in the Journal of Vertebrate Palaeontology.

Based on the size of the tooth, the extinct species was probably about a metre (39 inches) long, nearly three times the 38 cm length of the modern platypus.

Named “Obdurodon tharalkooschild”, it was identified in a deposit that has not been dated yet but is likely to be between 5 million and 15 million years old.

“Rebecca was the first one to realize there was a monster hiding among the normal fossil platypuses,” Professor Mike Archer from the University New South Wales told Reuters.

“This was a very dangerous animal. If people had been around at this time, you would want to see signs posted at the pool saying ‘Don’t swim here: Gigantic monstrous human-eating platypus’.”

While the furry mammals with the duck-like bills give a cute and cuddly impression, male platypuses have spurs on their hind legs that inject a ferocious poison.

The paper that will be published next week was co-written by Pian, Archer and Associate Professor Suzanne Hand of the University of New South Wales.