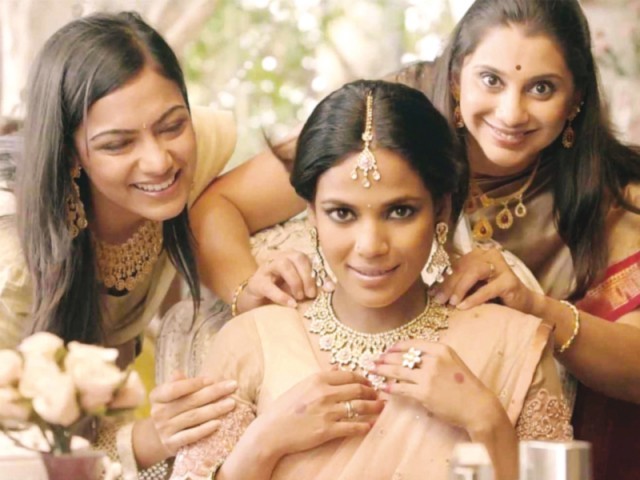 The ad has caused a stir amongst viewers with many labeling it as ‘revolutionary’. PHOTO: FILE

Everyone who belongs to the sub-continent is well-aware of the ‘fair bride’ stereotype and advertisements by whitening creams like Skin White and Fair & Lovely, end up making the situation even worse. But hats off to Indian jewellery brand Tanishq for discarding not one but two major social stereotypes that plague South Asian culture with their new ad — re-marriage and a dusky bride.

The spot shows a darker-skinned bride clad in Tanishq bridal jewellery. While getting ready, she spots a little girl standing at the door and asks her to step in. The two share a smile and walk together to the mandap (sacred covered structure for Hindu weddings) where the groom awaits her. The girl sits next to the groom’s parents while the bride and the groom continue with the ceremony. In the middle of it all, the little girl refers to the bride as mom and insists on joining her for the ‘pheras’ (rounds around sacred fire). While the mother refuses, the groom realises her disappointment, holds her in his arms and then proceeds with the ceremonial rounds.

The ad, which has been directed by Gauri Shinde of English Vinglish fame and created by the advertising agency Lowe Lintas and Partners, has caused quite a stir amongst viewers and has received an overwhelming response. According to the Huffington Post, AdWeek has called the ad “revolutionary” and “crazy bold”.

“[Viewers] may not be going through the same thing in their life, but the ad makes a bold, progressive, statement and people like to be associated with brands that make such statements,” said Arun Iyer, national creative director of Lowe Lintas.

It appears that Tanishq has hit the right chords with its target audience. “Go Tanishq Go! Go India Go! #Tanishq Please watch new Tanishq ad. Dusky bride with a child about to re-marry — awesome,” tweeted Sunitha Sarathy, a user on Twitter. Indian fashion designer Masaba Gupta also took to Twitter in support of the ad. “So proud to have lived to see a time where caramel skin and re-marriage are celebrated unabashedly by a leading brand,” she posted.