Slowly but surely Pakist­ani women are seen in fields where until a few years ago they would not have imagin­ed workin­g.
By Manahyl Khan
Published: November 2, 2013
Tweet Email 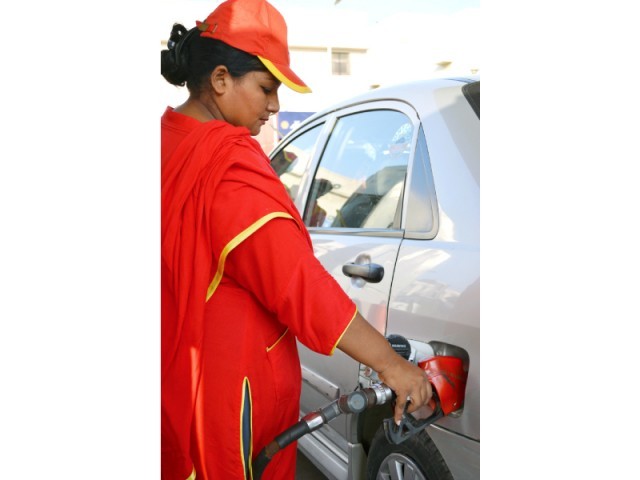 Both Alishba and Kiran had taken the surrounding hesitation as one of the key motivators to join a workforce silently meant for men. PHOTO: EXPRESS/MANAHYL KHAN

Alishba Nadeem had to wait to find out whether the boy’s family approved of her as their prospective daughter-in-law or not. As a petrol station worker, she sort of expected that.

The fumes of petrol are somehow drowned out by the sense of accomplishment that Alishba wears on her bright red uniform. Alishba works on the forecourt of a Shell petrol station and is designated as a site coach. Her responsibilities include performing safety drills, inspecting employee uniforms, customer care and refuelling cars.

Out of a 100 site coaches in the company’s pumps in Karachi, 98 are male. Alishba is only one of two women who have dared to venture into a field long considered the domain of men.

For a woman in Pakistan, a site coach’s job is no cinch, since there is constant interaction with men. However, Alishba is more than up to the task, managing her 35 male subordinates with ease. “At first, I felt weird as it was unnatural to work mostly with men. Cars would come and go and people would stare. It would make me feel guilty [about my profession],” said Alishba as she recalled her first week on the job, three years ago.

Kiran Naz, the other female site coach for the company, is also based in Karachi. Kiran recalled her brothers’ reactions when she decided to work at a petrol pump. “My brothers feared the embarrassment they would face when they would cross the pump with their friends.”

Both Alishba and Kiran had taken the surrounding hesitation as one of the key motivators to join a workforce silently meant for men. They agree that the resistance put forward by their families was not baseless. “Once a customer laughed in my face and asked, ‘You couldn’t find anyone else to put here?’” Alishba said while she looked down at her toes.

In the past she has endured incidents of hooting, whistling, and errant customer behaviour. Alishba knows there is no guarantee it won’t happen again. “We have learnt to deal with such situations using our own skills and friendly attitude” Kiran explained. There is no official process to report harassment on the forecourt of the petrol stations.

Slowly but surely, Pakistani women are seen working in fields. In the small steel box at the Karachi airport collecting parking receipts from vehicles or while driving people around in a rickshaw, these women are the new pathfinders for their gender in certain professions.

“We actually prefer girls because they manage the temperament of clients [better],” said Samreen Afzal, a territory manager for the company.

She confirmed that petrol stations receive plenty of applications from women, but the hiring rate is very poor in comparison. There are a number of factors to explain the lack of female presence in such a profession. “The women who apply have to be placed in areas that are female-friendly.” They tried hiring full-time fuellers as females in the past, but customers harassed them out of the job.

Apart from the security risks associated with a job in the public sphere, women require flexibility- something a petrol pump is not equipped to provide. “The timings [of such a job] are challenging and require late shifts,” says Afzal.

And yet, despite the hurdles, Kiran and Alishba have managed to prove their worth in representing the different layers of working women in Pakistan.

Nadra clears doubts: No ban on issuance of smart cards