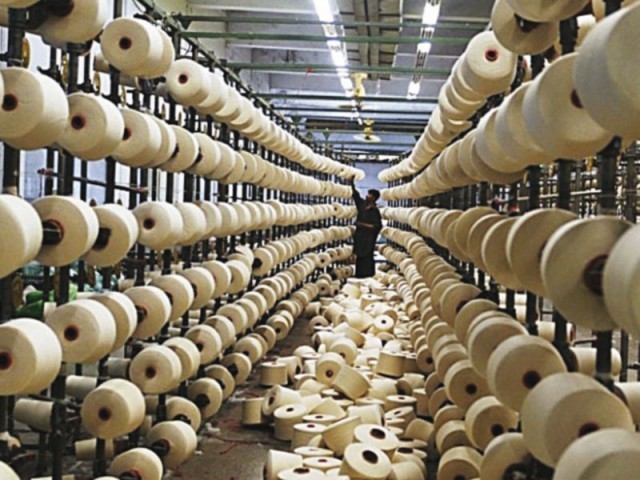 Per capita productivity is the lowest in the textile sector in comparison to regional countries. PHOTO: FILE

FAISALABAD: Federal Secretary for Textile Industry Division of the Ministry of Commerce Rukhsana Shah met with members of the textile industry at the Faisalabad Chamber of Commerce and Industry on Friday to discuss measures to jump-start the industry.

The federal secretary said that the ministry understands the problems being faced by the textile industry and is committed to resolving them.

She said that Faisalabad, with its huge manufacturing base and share of textile exports, should have an expo centre to further increase exports.

She assured that the Ministry of Textile and Industry will join efforts to resolve the problems faced by the textile sector in the country and provide its full support and resources to promote the industry.

She assured industry members that the Ministry of Finance would be contacted at the earliest for the release of refund claims by exporters. She said that Federal Textile Board is being made active now.

She said that the textile sector is in jeopardy for the last three years due to energy crisis in the country and we are making every effort for refund of claims.

She said that per capita productivity of our workforce is already at the lowest ebb in the textile sector in comparison to that of regional countries. She said that we need at least 300,000 skilled force for the industry every year but serious demand-supply gap exists in the need based skills and the Ministry can also help on that score. She said that 25% gas quota would be provided under all circumstances to textile makers.

President FCCI Engineer Suhail Bin Rashid said that the textile sector is in crisis due to huge problems faced by the sector where shortage of electricity and gas, taxation and high mark-up rate of bank loans are the main issues.

He said that we have invited the government’s attention to these issues time and again, warning that without tackling these problems, the target of $95 billion set under the Strategic Trade Policy Framework (2012-15) cannot be achieved.

He said that textile sector is providing employment to 38% of the workforce in the country and in case of non-availability of gas for the next three months to the industry, nearly 10 million labourers will be rendered jobless.