The platfo­rm is all geared up, here to stay.
By Sher Khan
Published: November 1, 2013
Tweet Email 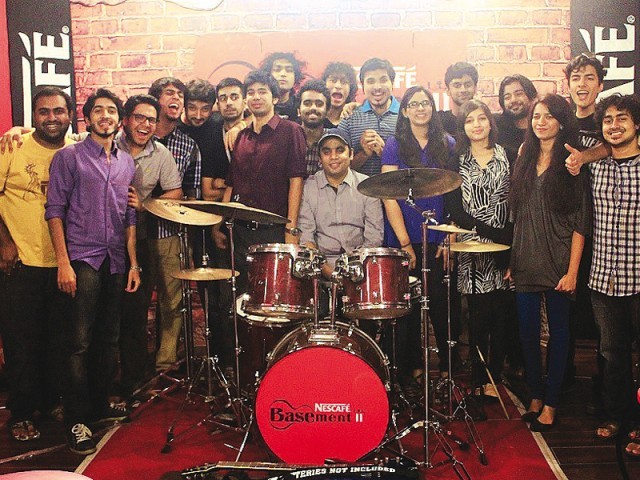 The platform is all geared up, here to stay. PHOTO: PUBLICITY

The euphoria surrounding Coke Studio’s season six, which started out with Fariha Pervez’s unimpressive performance, is in no way stopping Nescafe Basement from becoming bigger and better. After just one season, the platform has seen significant growth as the number of interested participants grew from 98 last season to 1,300 this season. And with a larger pool of talent aboard, Nescafe Basement season two promises swagger, style and freshness.

Despite having a popular brand name attached to it, Nescafe Basement had a rather low-key release last year. However, this year the team seems confident about leaving a mark. While small-scale projects like Uth Records have previously tried to enter the Coke Studio league, one can safely say that Nescafe Basement is probably the only forum in direct competition with Coke Studio.

“We are very confident,” says Nescafe’s brand manager Maha Khawaja. “This has always been for the youth and by the youth. We believe young people should have the opportunity to express themselves.”

“Last year was sort of a test year but this time around, we have added a lot of new things,” she adds. The team aims to make it more than just another music show by building local networks, and connecting musicians on a local level.

With growth on their mind, Nescafe Basement will have eight weekly episodes, each showcasing two songs with behind-the-scenes documentaries which will highlight the journey of hidden musical prodigies. Apart from television broadcasts, the show will also have a digital component that includes their website, Facebook page and Twitter.

“We are here to stay. I feel that this is just a scratch on the surface considering the potential of our platform. We want artists to be part of a broader support network and continue as mentors and brand ambassadors,” asserts Khawaja.

Considering that an artist like Zulfiqar Jabbar Khan aka Xulfi, who we loved for his heartfelt and soulful voice back from the days of EP, is leading the mentees, it is not too much to expect something substantial from the platform. And it seems that the participants are also enthusiastic about being part of such a team.

“This has brought us all together as one. We are [very] different from Coke Studio, which has established individuals. We are all new, so our sound will also be new,” says Sameen Kazim, 21-year-old marketing major at Lahore School Economics. She has predominantly done Western vocals and is now flexing her vocal chords to cover Nazia Hassan’s famous Boom Boom.

Shahrukh Aslam, a political science major from Lahore University of Management Sciences, who has not played in any real gig or show, feels Nescafe Basement will have a more abrasive and original sound based purely on growth and experimentation.

“It seems that Coke Studio has become comfortable with a particular formula and has more of something that connects with the middle-aged sensibility. This [Nescafe Basement] is slightly more abrasive and tries to push normal musical labels,” says Aslam.

“Really, I was surprised at first when I saw this year’s marketing budget. I think people are starting to believe that we have potential and this should be done on a bigger level,” he adds.

Though the youth element and freshness is something that everyone is taking pride in, majority of the songs will be covers of classics and popular Pakistani songs with only a few originals. It seems that Nescafe Basement clearly distinguishes itself from Coke Studio for being more youth-appropriate, but only the audience can decide whether this is really the case.

Get the look: Casual is the word