Babar Ali Khanna: The journey of a rising star

Babar Ali Khanna: The journey of a rising star 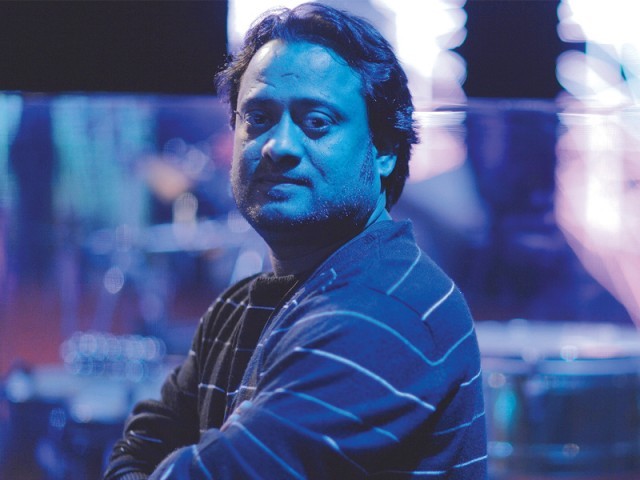 Tabla and dholak player Babar Ali Khanna can be called a lone ranger. While his musical journey spans a period of nearly 20 years, it was his appearance on Coke Studio Season One which really gave his career an instant boost.

In an industry dominated by string instruments, this tabla player’s talent speaks for itself. Khanna’s hand at Eastern percussions has marked a territory of its own and today, he is the country’s rising star.

“This instrument [dholak] is a part of our country’s identity,” Khanna tells The Express Tribune. “I wish to spread its sound all around the world. It is the one instrument that gives the message of happiness.” Khanna belongs to a musical gharana: his father Ustad Mushtaq Ali was a rhythm player who played with iconic musicians such as Mehdi Hasan and Mohammad Rafi, and was also the first Pakistani to be invited outside the country as an instrumentalist; his grandfather Ustad Inayat Husain Nigarchi was known for playing a rather rare instrument called nagara.

The story of Lahore’s gharana and familial music network was that it was dominant and entrenched with anything that had to do with entertainment — the film industry, concerts and academies. But by the time Khanna got involved in music at the age of 15, this music scene was slowly becoming extinct. His uncle introduced him to him Ustad Waris Ali Balloo and Ustad Ejaz Hussain Ballo Khan who went on to train Khanna for the next eight years, before he went on his first tour abroad.

“I could have learnt [music] from my father, but I suppose when you’re young, you don’t really take your parents seriously,” Khanna admits, adding that this in turn did allow him to pursue music professionally. He was a part of theatre, films, television and radio. However, the influx of Western music and changing trends limited his performances to weddings and most bands had no requirement for a dholak player. With the addition of his household responsibilities, Khanna was pushed into exploring options abroad.

“This [dholak] was becoming obsolete,” he reveals. “There was a lot of work still being done in films during the time I was practicing and studying. But by the time I had learnt how to play and was looking for work, the opportunities were less.” He feels pop bands were not interested in dholak or tabla players either which reduced options further. “Maybe they [bands] didn’t like the sound.”

Khanna ended up giving tabla and dholak lessons instead for the next five years. After he returned to Pakistan in 2007, his friend Rahat Inayat Ali was in search of a percussionist who could play a wide assortment of instruments. He then got the chance to be a part of Coke Studio where he jammed with producer Rohail Hyatt and proved his musical prowess.

“For the longest time, I had been confined to the dholak. But in Coke Studio, I was allowed to experiment and create [different sounds],” he explains. “I feel just as much as people now know me, they have also [simultaneously] learnt about the dhol.”

Khanna has finally pushed through the hardships and is now looking to venture into composing. Just last year, he performed with the BBC philharmonic — a national British broadcasting symphony orchestra — which is an honour in itself. And in the local scene, Khanna is set to compose percussions for upcoming film Manto. He has also started up a folk-instrument band with musician Mekaal Hasan, bassist Amir Azhar, flutist Muhammed Ahsan Pappu and sarangi player Zohaib Hassan who have successfully performed a few gigs.