‘WAAR’ on terror: A story of unsung heroes

‘WAAR’ on terror: A story of unsung heroes 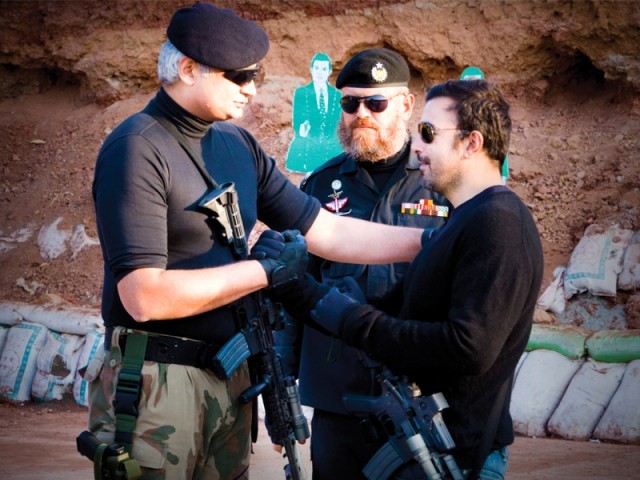 Dr Hassan Rana and Shaan in a scene from Waar PHOTO: PUBLICITY

“Right now, as your readers read this article, out there somewhere an Mi-17 pilot is helping our soldiers or rescuing victims of natural disasters. Right above him will be a Cobra helicopter pilot and a gunner, both looking out for them,” says Dr Hassan Rana, the action director and writer of Waar — Pakistan’s first big-budget war film that portrays the good and the evil sides of the war on terror.

The country has lost over 7,000 security personnel, both from the armed forces and police, who have fought to save the lives of citizens and safeguard their motherland.

The talks with the Taliban are currently ‘work in progress’ – to do or not to do, that is the question. Against the backdrop of disarray and confusion regarding possible solution to terrorism in Pakistan comes Waar. It could not have been more timely.

The makers of Waar have conducted substantial research in their attempts at recreating the violent and insurgent atmosphere. The aim, they explain, is to give an accurate ‘feel’ of how Pakistan’s armed forces tackle Pakistan’s burning issue on battlefields. “The viewer shall have a pretty accurate idea of how our true heroes take the battle to the enemy,” said Rana.

Makers of the film knew that this depiction could not be sketched and coloured in without the help of Pakistan’s Armed Forces and Police Services. To get the ball rolling, the film-makers – with the blessings of the then interior minister Rehman Malik who guaranteed support of the FIA – embarked upon a journey that brought them close to the frontline forces in the war against terrorism.

“We were given the honour of meeting some of the best soldiers in our army, who fought many battles for our country. From there, we were able to understand the basic instinct of a Pakistani soldier,” says Rana.

Senior Superintendent Police (SSP) Mirvais Khan from Islamabad Police supervised the sequences pertaining to the police department in other places in the film, whereas it was SSP Malik Yousuf (now additional director, FIA, Islamabad) who supervised all the shooting inside the Police Headquarters.

“From developing uniforms to ensuring accuracy, the choice of weapons and tactics everything was as real as it actually happens in the police,” said Yousuf. One of the sequences shown in the film is inspired by an actual event whereby the Police Academy in Lahore was attacked in 2009.

About the debate on social media regarding the kind of involvement the Pakistani army had in the project, Yousuf believes that Waar has played a key role in highlighting the losses of the police. “It’s true that operations in the conflicted area are carried out by Pakistan army but the Police haven’t suffered any less,” said Yousuf. “Media has deliberately ignored the huge sacrifices made by the police in the war on terror but after watching this film the layman would recognise it.”

“Usually it’s the unprofessional people who deal with on-screen portrayal of the security forces which is why a lot of Indian films get it wrong. But I personally made sure that accuracy is not sacrificed at any cost,” he says.

It took an entire year for the crew to cast the right weapons for the film. “Most of the weapons that you shall see in the film are currently in service and are the mainstay of our security forces and likewise for terrorists,” explains Rana.

“I am pretty sure that all the viewers shall be mighty proud to see their Cobra Gunship and Mi-17 helicopters in action,” said Rana. The weapons change with the types of battle scenarios in the film such as CQB (Close Quarter Battle) to HRT (Hostage Rescue Tactics) to all out battles complete with Air support.

The pilots who flew the aircrafts couldn’t be contacted as they were busy transporting relief goods to the quake affected areas of Balochistan.

The weapons shown being used in the film by the armed forces and terrorists are accurate and reflect the weapons actually used by both the sides.

The good guys use