Coke Studio: Fariha Pervez is ecstatic — but we beg to differ

Coke Studio: Fariha Pervez is ecstatic — but we beg to differ

What Coke Studio serves is a non-starte­r — that turns cold even before the seven minute­s are over.
By Sher Khan / Ali Haider Habib
Published: October 21, 2013
Tweet Email 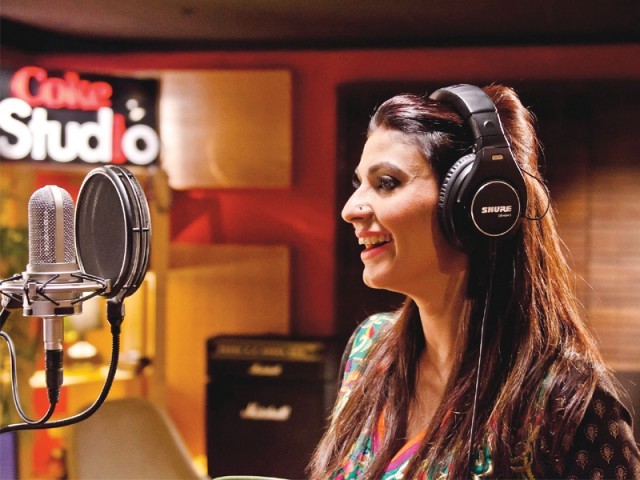 The veteran singer has developed quite a following over the years due to her repertoire with the audience as well as her versatility and tells us that her debut this season materialised when she approached the famed platform herself. “I never tried to be a part of Coke Studio before but this season, I asked Rohail and he immediately called me over through his team,” Pervez tells The Express Tribune.

Working with Rohail is something that many artists have cherished, and Pervez’s experience was no different. She says that Rohail’s charm lies in the fact that he allows musicians to decide their songs for themselves.

“Rohail is a music lover and is willing to work with anyone who is good or has potential. But what makes it an awesome experience is that he makes artists feel comfortable and lets them sing whatever they want,” she says. She highlights that Rohail gave her the opportunity to perform live in Turkey with Turkish musicians.

For Fariha, the timing of her debut with Coke Studio couldn’t have been better, because for the first time the hit show is featuring a diverse group of international musicians. Her performance features the contributions of a Serbian house band alongside a brass section and a string orchestra, complemented by Coke Studio’s dhol group that provides the essential Punjabi folk element to the track.

“The opportunity to perform with people from abroad provides a totally different experience not just in terms of enjoyment but also in terms of learning. This will allow us to not only hear a whole new variety of music but will also put Pakistani music on an international stage,” asserts Pervez. “International musicians
are definitely going to create a different sound [for the platform],”
she adds.

As far as her performance is concerned, Pervez feels that it provides a different ethos to the original version and gives it a fresh appeal. “This song is really important to me because it was a source of inspiration growing up. The rhythm is entrenched in my genes,” says Pervez. The original version has been composed by Nusrat Fateh Ali Khan and written by Bulleh Shah.

“Moazzam provides flavour to the song and gives a certain amount of variety to the qawwali. Also, he is from Ustad Nusrat Fateh Ali Khan Sahab’s family and for that reason alone it was an unforgettable experience,” she adds.

While Pervez is happy with her performance, we beg to differ. One of Western music’s primal pleasures is the way the kick drum locks in with the bass guitar and Jogi is proof that a great rhythm section can add grease to even the driest of productions. That and the tasteful brass section salvage an otherwise ordinary track. Though not as overly-produced as its predecessors, the song is still too slick for its roots. The silence between the strumming and the humming is a bit too obvious.

It wouldn’t have been unreasonable to expect a fire-starter to set the mood right for a much-anticipated season six of Coke Studio. But what is served instead is a non-starter — that turns cold even before the seven minutes are over. Fariha Pervez fails to make an impression of any sort — her vocal delivery has neither the power of soul nor the charm of a diva. First is the worst? We only hope!

Did you know?: Ellen DeGeneres gave 10,000 dollars to a waitress