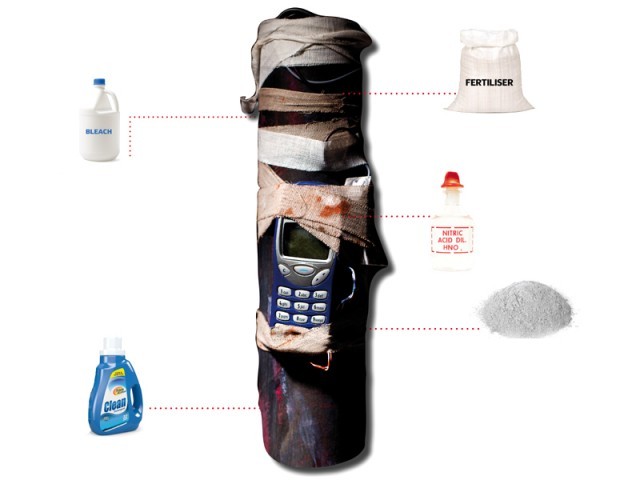 Law-enforcers not aware, trained to deal with regular supply and use of IEDs: Classified report. DESIGN: MUNIRA ABBAS

It is the perfect weapon for asymmetric warfare and urban militant groups. The Improvised Explosive Device (IED), or crudely homemade bomb, has increasingly been used by insurgents on both sides of the Durand Line. Reason: It’s cheap and easy to make.

More than 51,000 people have lost their lives as a result of IED blasts since the war against terrorism began, said Director-General Military Operations Major General Ishfaq Nadeem Ahmad at the C-IED symposium in Rawalpindi on May 20.

At the same symposium, army chief Ashfaq Parvez Kayani said, “The threat and impact of these weapons is not [just] Pakistan-specific. These have been used with unfortunate consistency in Iraq and Afghanistan. The recent Boston bombings involving the use of an IED manifest the international dimension of this threat and serves as a stark reminder that even the most developed nations of the world remain vulnerable to this threat.”

Unfortunately, this cardinal security peril does not seem to be a priority for the government and LEAs.

A highly-classified report prepared by an intelligence agency, forwarded to the police and other law-enforcement agencies (LEAs), pointed out several flaws and grey areas, regarding the sale and purchase as well as the poor monitoring of explosive material, particularly IED components.

The report states that the general public and the LEAs are neither fully aware of the use of the homemade bombs nor do they know how to tackle the menace. The security system and apparatus is quite vulnerable because the rules and laws are not implemented and there is a dearth of community participation, the report concluded.

Our LEAs are not properly trained vis-a-vis IEDs and even the bomb disposal squads lack the requisite training and proper equipment.

Terrorists exploit these liabilities, as is exemplified by the increasing number of IED attacks.

It is imperative to note that SOPs in this regard either do not exist or have not been implemented.

IEDs are in demand purely because of efficiency – minimal cost, high yields. High casualties, rather.

With abundant knowledge, easy availability of IED precursors, increasing lethality, effortless concealment, accurate targeting along with an exceptionally low cost, the IEDs are the ‘perfect’ weapon of choice for terrorists.

The unmonitored sale of IED precursors in the industry and local markets, alongside the vendor industry of electronics, pose a serious threat to Pakistan regarding the manufacture and profuse supply of IEDs.

Chemical precursors are available in various forms and have a wide variety of use. Due to their dual usage, these chemicals are legal to purchase, store and transport. These can be easily converted to homemade bombs and form the charge (explosive) of the IED.

Similarly, electronic precursors – used to detonate the main charge – are also readily available in local markets of Pakistan. Remote-control devices such as garage openers and car security alarms are purchased and used by terrorists to make the initiator (fuse) for IEDs.

Due to the difficulty in checking the open market of IED components, a mechanism needs to be in place to thwart the prevalent use of the improvised bomb.

According to the rules of the Pakistan Telecommunication Authority (PTA), permissible range of the remote control device to be sold in the country is 10 metres.

Provinces should take charge of the explosive department and foolproof SOPs ought to be implemented to monitor the flow of commercial explosives.

Nevertheless, some measures have been taken. The country has taken steps to prevent locally made fertiliser for agriculture from being used as explosives in roadside bombs that target American troops in Afghanistan.

Many of the IEDs used in Afghanistan contain materials derived from calcium ammonium nitrate fertiliser produced in Pakistan at two factories.

However, even if the supply or availability of calcium ammonium nitrate is curbed, there is a chance that terrorists may switch to another precursor.

LEAs could be especially trained on IED recognition and bomb scene management, the report concluded.

Meanwhile, LEAs need to undergo proper training as some of them cannot even recognise an IED. Specialists of such roadside and homemade bombs are very well aware of this vulnerability, according to the highly-classified report.

LEAs could be especially trained on IED recognition and bomb scene management, the report concluded.

What is an IED?

An IED is a homemade bomb constructed and deployed in ways other than conventional military action. It is built on the same grounds as a conventional explosive. It has five components: a switch (activator), an initiator (fuse), container (body), charge (explosives), and a power source (battery). An IED is specifically designed for use against armoured targets such as personnel carriers or tanks.

Potassium chlorate can be made from common household bleach and a salt substitute. It is also present in fertilisers, safety matches and fireworks.

A new invention? Not quite

The term IED comes from the British army in the 1970s, after the Provisional Irish Republican Army (PIRA) used bombs made from agricultural fertiliser and Semtex smuggled from Libya to make booby-trap devices or remote-controlled bombs. IEDs were also extensively used by the Liberation Tigers of Tamil Eelam against Sri Lankan military targets.

Peroxides due to their bleaching effect are used in detergents and hair dyes. Variations of the compound are also used in dental products.

Ammonium Nitrate and Urea is a common component of most agricultural fertiliser and can be found in instant cold packs. It is also a major compound in most explosives and can be used to alter rate of explosions.

Nitric Acid is a highly corrosive acid used in the manufacture of fertilisers and explosives. It is also used in a range of industrial metallurgical processes.

Aluminum powder is used to enhance the effect of the blast. It is commonly found as a component of flash powders.