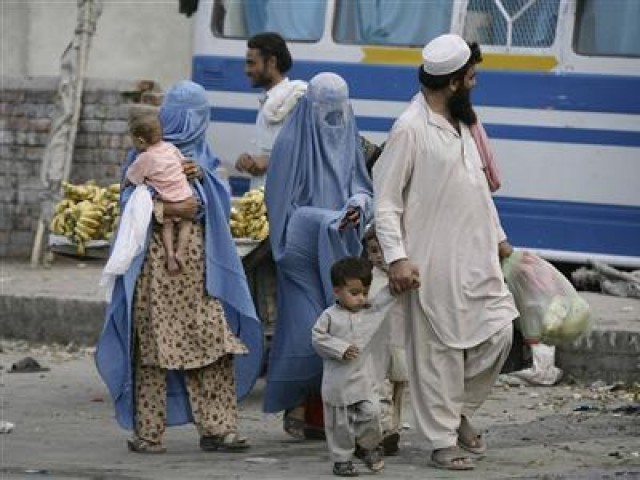 The government has imposed bans on the movement of Afghan refugees several times in the past. PHOTO: REUTERS/FILE

A petition filed in the Peshawar High Court (PHC) seeking legislation governing Afghan refugees living in the country – particularly in Khyber-Pakhtunkhwa (K-P) – highlights a crucial need as it urges to provide legal cover to their businesses and other activities.

In a special meeting held three days earlier, the Pakistan Tehreek-e-Insaf (PTI) led provincial government also gave directives to district governments to monitor the activities of all Afghan refugees living in the province. It ordered the immediate deportation of any Afghan refugee involved in militant activities.

The government has imposed bans on the movement of Afghan refugees several times in the past. The refugees were often restricted to their camps during sensitive times of the year.

On April 4, elders from Mohmand Agency held a news conference at the Peshawar Press Club, demanding the government block all CNICs issued to Afghan refugees on fake documents, to ensure transparent general elections.

In February, Federal Investigation Agency (FIA) arrested four officials of National Database and Registration Authority (NADRA) from its Hangu office. The officials were allegedly involved in issuing fake cards to Afghans in exchange for money. A case against these officials has been in progress since 2009.

The petition, filed by senior Advocate of the Supreme Court, Muhammad Muazzam Butt, said: “When citizens of Pakistan migrate or engage themselves in business or employment in any other country, such engagement is always regulated by the legal system. Afghan refugees conduct business in Pakistan and have shops in every bazaar of Khyber-Pakhtunkhwa and as per policy are not granted citizenship.”

But it is an open secret that thousands of them have obtained fake national identity cards, passports and valuable property,” read the petition.

Earlier, PHC division bench had directed the federal and provincial governments to make arrangements for the early repatriation of Afghan nationals, since the country could not afford to provide shelter to such a large number of refugees any longer.

The court questioned why international aid organisations did not help repatriate Afghan refugees when the government was functional, and ISAF and NATO forces were taking care of the security situation.

The stay of Afghan refugees expired earlier in June this year, but the government then extended the stay till 2015.

The provincial government needs to enact adequate legislation to monitor the activities of Afghan refugees so the national exchequer does not have to bear the burden of refugees.

Missing in action: District public safety commissions yet to be formed