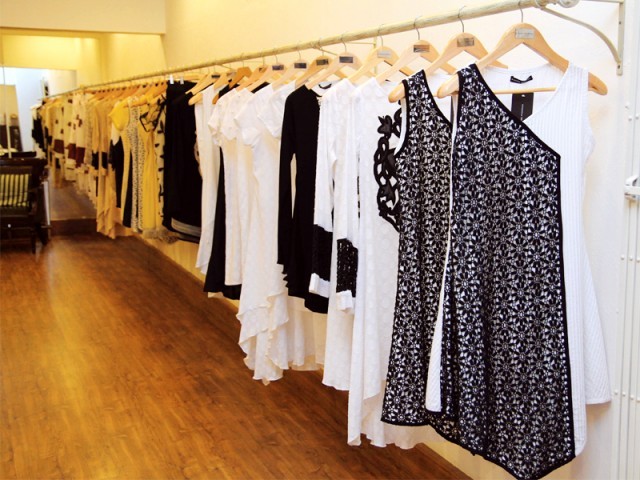 Designer behind the newly launched label says she gravitates towards streamlined, clean cuts.

Before moving to Karachi last year, Khalid studied and worked in Canada for nearly a decade. Her portfolio boasts work experience at Canadian ready-to-wear luxury brand Pink Tartan as well as the fashion forward label Tevrow + Chase (launched by Club Monaco co-founder) known for its edgy and fashion-forward pieces. Back then, she claims that her clientele included A-list celebrities like Natalie Portman, Gwen Stefani, Kate Hudson and television queen Oprah Winfrey. Today, with a freshly launched label and an exhibit at Labels under her belt, she has managed to dress Pakistan’s film diva Humaima Malik.

“I moved back to Pakistan to allow people to get a fresh look at fashion … [something] modern with a mix of traditional,” says Khalid. Adjusting to work ethics in Pakistan has not been easy. “Sadly, they [Canadians] are more organised. Also, there you get a fair shot at thing in Western countries but here you need to pull some strings and meet the right people. It’s what and who you are, that matters here but in the West, it is the talent that matters the most,” she says.

The designer’s aesthetic lies somewhere in the middle of the East-meets-West spectrum, a space already taken over by illustrious and edgy designers like Sania Maskatiya, Nida Azwer and Misha Lakhani as well as more affordable and mundane retail brands like FnkAsia. Her collection titled The Holiday offers loosely-structured pieces including flared kimono and raglan-style tops that are enhanced by trimmings of crochet, fringes, pearl and appliqué work and paired with asymmetrical chopped slacks and Jodhpur churidars.

“Inspired by Eastern wear combined with the aesthetics of the Hamptons,” is how Khalid describes the collection. Based on a neutral colour palette that includes black, beige, yellows and white, the debut showcase proposes both short and long hemlines with layers and simple cuts. The label doesn’t quite echo the sartorial trends of the Hamptons — sleek floor-skimming maxis, flirty chiffon dresses and fedoras. But there is definitely a touch of the laidback sophistication that Hampton chic radiates. Khalid’s strength it seems lies in “clean lines”, which she says comes from her time working in sportswear. “Women should always look chic, put together and understated in the right way,” she says. Her outfits are for the no-fuss woman, in that they are wearable and minimal with no extra frills. The label’s official website too is sophisticated and user-friendly, with a photoshoot from The Holiday collection featuring tasteful props such as surf boards and picnic baskets.

Though the exhibition on Monday was a rather quiet affair, Khalid seems positive about the response. “People enjoy the aesthetics because they aren’t too difficult to understand,” she says. “There are resources in Pakistan, as well as access to material and talent, which are all an integral part of starting a business.”