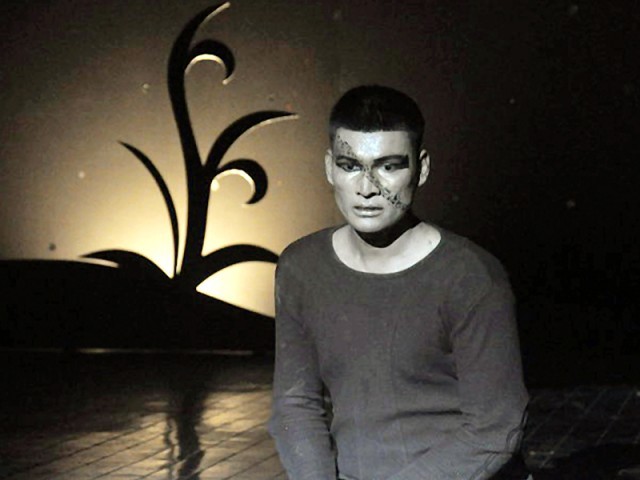 Shankar effectively heightens the intensity of each scene despite a lackluster script. PHOTO: PUBLICITY

Theatre, “the greatest of all art forms,” as Oscar Wilde rightly says, has been in dire need of the right formula — the kind that would propel people, especially the youth of Pakistan, to appreciate work of substance.

Over the course of time, theatre has become a seminal mode of expression for the nominal, progressive section of the society. With troupes like Dastak, Tehrik-e-Niswan and Ajoka, which highlighted socio-political issues as pertinent and real as human rights violations, theatre gradually became a tool for social retaliation. However, in a society marred by chaos and violence, it has been anything but easy for the performing arts to flourish.

Despite the commendable efforts of the aforesaid cultural institutions, theatre, as a form of cultural and artistic expression, hasn’t evolved in terms of theatrical execution. Although a pity, younger members of the audience are not attracted to plays with socio-political themes due to what they feel is a lack of the ‘entertainment quotient’. They then turn to what has come to be known as the more viable alternative: big-budgeted Bollywood-inspired plays such as Bombay Dreams.

In the battle of the “critically acclaimed” and the “commercially successful”, it is becoming increasingly hard to find a play that provides both food for thought and entertainment at the same time. One young man, who must be appreciated for his attempt to bring these two into harmony, is Sunil Shankar. A graduate of the National Academy of Performing Arts (Napa), Shankar is a man on a mission. By constructively diverging from directorial clichés, he has played an imperative role in rekindling contemporary theatre in the country.

Unlike most of his seniors and batchmates who have become household names in television and theatre, acting has never been Shankar’s claim to fame — it has always been direction. “Well, acting and the audience’s reception that follows have their own charm,” said Shankar, who did a rigorous physical exercise routine for his latest directorial venture Court Martial. “But being known for direction is a more comforting thought for me. The physical exercise routine and everything is so vigorous that despite being the director, I feel no less than an actor when my soldiers (characters in Court Martial) take the stage,” he said.

Known by his faculty and classmates for his out-of-the-box thinking, the real public display of his genius was when he staged his rendition of Peter Shaffer’s Equus. Thenceforth, there was no stopping him; he directed plays the likes of Manto Aur Ghalib: Aik Guftgu, Marad/Sade, and the more recent Court Martial.

“Sunil Shankar’s Napa production of Court Martial is the sexiest thing you are likely to see on Karachi stage. GO,” journalist and author Mohammad Hanif tweeted after watching the play. Court Martial, which is a courtroom drama, truly put Shankar’s ability to test. Shankar impressively breathes life into what is otherwise a mediocre script. “It was very challenging for me because I couldn’t find a lot of visually captivating moments in the play,” Shankar said. “So I had to engineer a lot of things on the stage and in the script to make an apparently traditional play seem very dynamic,” he added.

And he does it. The one word that perfectly describes the play is “dynamic”. As a member of the audience, one gets to witness an elaborately assembled courtroom in which men in uniform represent a paradox: their uniforms have nothing to do with the thematic significance of the play and at the same time, have everything to do with it. “The play talks about the dichotomy that exists within one’s own psyche when someone has to pick between their ego and social obligations,” explained Shankar. “The audience would find the play very simple and disgusting at the same time. Simple, because the language is easy to understand and disgusting, because by the end of it, you’ll start relating yourself more to the disgust of the bad characters than the honesty of the good ones,” he said.

Court Martial has completed its first round of shows and the second round is due to end this Sunday at Napa. It is a highly recommended play for theatre enthusiasts, especially those who yearn for an entertaining play with a message. Shankar also plans to run his commercially and critically successful play Equus soon, for which he is currently looking for sponsorships.