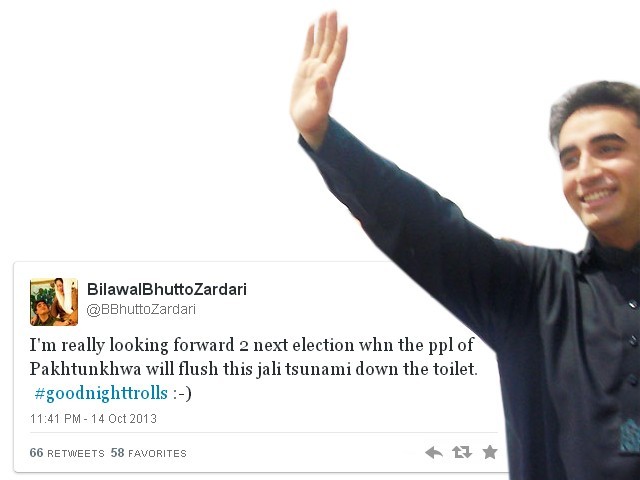 The war of words began on October 12, when PTI leader Asad Umar tweeted a reply regarding the teen activist’s desire to become Pakistan’s prime minister one day.

Bilawal Bhutto, who was tagged in the earlier tweet, took the opportunity to criticise PTI Chairman Imran Khan.

@Asad_Umar @KamranNawaz6 I want Malal 2 b my PM. She puts IK 2 shame coz at 14 she had courage to talk against TTP but IK is a coward at 60.

Not one to hold back, Asad Umar responded to the criticism.

@BBhuttoZardari @KamranNawaz6 says the courageous leader who is not even willing to live in pakistan..

What followed was an outpouring of rage by PTI followers on both Twitter and Facebook. Tweets about the online exchange went viral, and became Facebook memes.

The young Bhutto replied to a number of PTI supporters, but also managed to sneak in a few potshots at the Insaafians.

@umairaa haha, ya ur peace match bs is just as brave as Malala. Cameron had hug a hoodie. IK has hug a Talib.cricket isn't gonna end terror.

Last night, Bilawal signed off with a smile and hashtag directed at the PTI, some of whom have continued trolling him.

I'm really looking forward 2 next election whn the ppl of Pakhtunkhwa will flush this jali tsunami down the toilet. #goodnighttrolls :-)

Eid at Edhi Home: A different festival for some