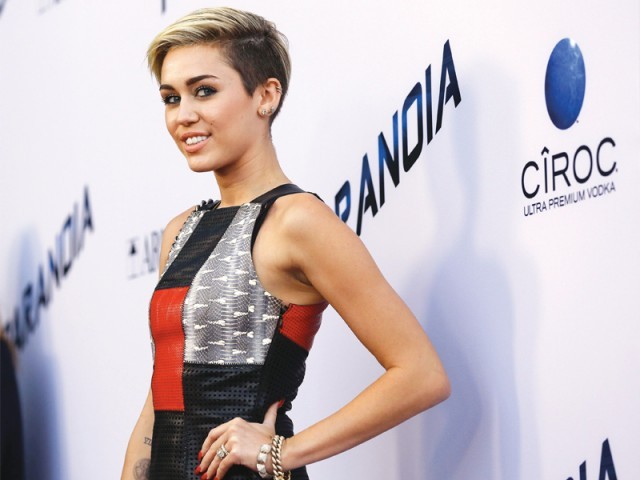 LONDON: American singer and actor Miley Cyrus became the first person to simultaneously notch up a number one single and a number one album in the British music chart this year, the Official Charts Company said on Sunday.

Her latest track, Wrecking Ball, went straight into the top slot in the single charts, while her fourth album, Bangerz, did the same in the albums chart. The result was the best yet in Britain for the 20-year-old singer, the daughter of country singer Billy Ray Cyrus, who scored her first number one hit in the British singles chart in August with We Can’t Stop.

Her success pushed last week’s number one single, Counting Stars, by US rock band OneRepublic, into third place, while American rapper Eminem secured the second slot with his new single Berzerk. In the albums charts, last week’s number one album, Days Are Gone, from Californian sister-act Haim, fell to fifth place, while Brand New Machine, an album by Chase & Status went straight in at number two.

The former Hannah Montana actor became the most talked-about pop star followed by her controversial performance and “twerking” at the MTV Video Music Awards (VMA) in August. According to singer Sinead O’Connor, Cyrus’s videos and performances are “a measure of how the young singer is being exploited by the music industry.”

The Irish singer demanded an apology from Cyrus and threatened legal action after the latter replied to her open letter with a series of tweets which mocked her history of bipolar disorder.