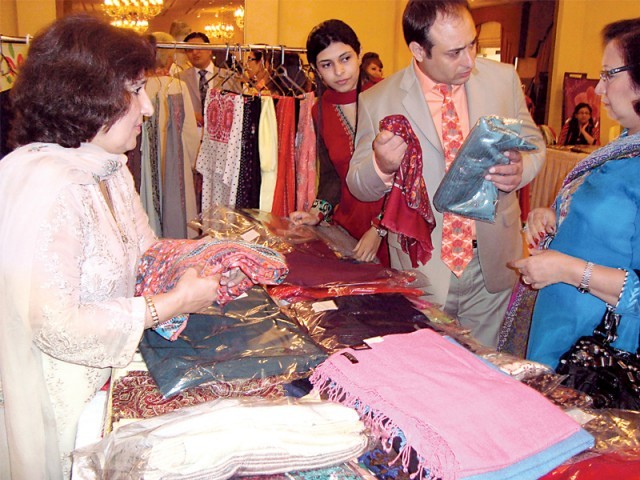 From clothes to handicrafts, the exhibition reflected the enthusiasm of women working within their comfort zones at home and simultaneously earning an income. PHOTO: EXPRESS

ISLAMABAD: Around fifty stalls exhibited the crafts and skill of home-based women entrepreneurs at Serena Hotel on Sunday afternoon. The event, organised by the Agha Khan Development Network, was held to endorse the work of women from underprivileged communities across the country.

From clothes to handicrafts, the exhibition reflected the enthusiasm of women working within their comfort zones at home and simultaneously earning an income.

Meena Kamal, a housewife from South Waziristan, was displaying her best embroidered suits with hopes of attracting customers doing the rounds. Kamal was promoting the unique embroidery skill of the area’s natives. With the aim to empower women and support them financially, Kamal has been working with more than twenty internally-displaced women that have been residing with host communities in South Waziristan for the past three years. “There aren’t many work opportunities for us as we live under challenging circumstances and conservative environments,” said Kamal. Connecting through various organisers, Kamal has managed to spread the word of her small business and makes enough to support herself and the other women.

As the level of independence of women varies from place to place, most women working from home have managed to make extra money, and thus gain a level of independence, through such initiatives. “This is an emerging trend among many women,” said Zahida Zameer, a native of Chitral who now lives in Peshawar. “My family would not allow me to go out and work, so I make bags, quilts and other cross-stitched items during my spare time” she said.

Zameer works with a dozen women in Peshawar who stitch patterns and motifs using different threads and materials and displays them at various platforms. Zameer, a mother of three, manages her household duties simultaneously.

Speaking to The Express Tribune, Hakim Shah, a branch manager of the Microfinance Bank, said with the passage of time, the trend of women applying for loans to start small businesses has been on the rise across Pakistan. With a 70-30 ratio, Shah said more women belonging to underprivileged segments of society are working from home.

The stalls displayed a variety of beauty products, embroidered clothes from the northern regions, contemporary modern outfits by fashion students of the twin cities, embellished ajrak shawls from Sindh, pashmina shawls from Srinagar, various handicrafts and jewelry items. “I work out of my home and the success of my small business in Rawalpindi has helped the women who work with me in paying their children’s school fees” said Mahwish Naeem from Urwa’s Ajrak Shawls.

Elli Takagaki, the founder of Paper Miracles, was displaying jewellery made out of paper by a group of women affected by the 2005 earthquake in Kashmir.  “There is just so much talent in Pakistan and such events not only promote their work but also encourages them,” she said.

“There’s nothing that these women cannot do and it’s fascinating to see such a turnout,” said Shahban Khalid, the president of the Islamabad Chamber of Commerce and Industry. “We should hold such events regularly to promote small businesses,” he added.