“There’s not much reason behind it, only to prove that securi­ty is just an illusi­on. It does not exist."
By Web Desk
Published: October 11, 2013
Tweet Email 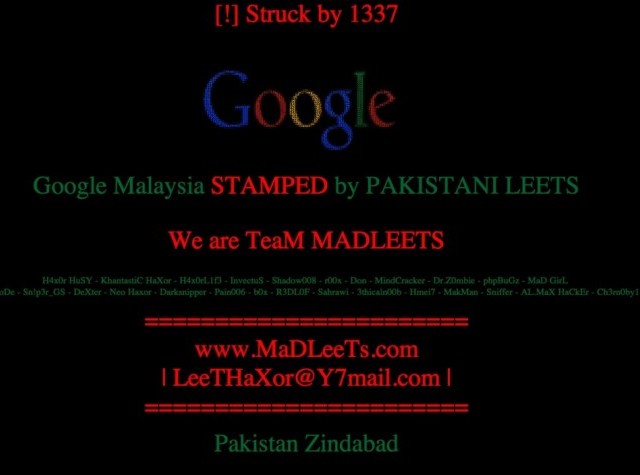 “There’s not much reason behind it, only to prove that security is just an illusion. It does not exist." PHOTO: TECHCRUNCH

KARACHI: Google’s Malaysian site — google.com.my — was hacked on October 11 by a Pakistani group called “Team Madleets”. The search site was off for several hours and the page listed a series of handles that was apparently the team’s doing.

The stamp at the top of the page stated “[!] Struck by 1337”. The number is supposedly one of the hackers of the group who has recently hacked domain registrars of several countries.

The “Team Madleets” had posted on their Facebook page saying “We feel we need to alert anyone, that we don’t hack any country tlds for example google.com.my as a result of any kind of hate, We don’t hate anyone, We love all humanity, there is no obvious reason for stamping the tlds. Least the reason is not any kind of hate. Whatever the reason is we can’t explain except we love all of you. Regard’s H4x0rL1f3.”

According to the page “MadLeets is a Ethical and 1337 White Hat Hackers Community. We are Anti Hackers , we teach how to protect yourself from getting hacked.”

Techcrunch, , stated, “If the reasoning on the team’s Facebook page is accurate, then this is simply a matter of doing it because they can and not to make a political statement.”

Techcrunch added “One possible motivation for the group taking action now, if it is indeed not simply ‘exposing vulnerabilities’ would be the Global Entrepreneurship Summit in Kuala Lumpur, which will be attended by Secretary of State John Kerry in lieu of President Barack Obama.”

TechCrunch tried to contact the hackers and received the following reply “There’s not much reason behind it, only to prove that security is just an illusion. It does not exist. We have no political intentions whatsoever, as you have already stated. Regards, LeeT.”

Google Malaysia was also hacked back in July, along with several other Malaysian sites, by a group protesting the treatment of Bangladeshi workers in that country.

No Nobel for Malala