Malays­ia is a human and econom­ic mosaic - and it is a model for the world,say Kerry
By AFP
Published: October 11, 2013
Tweet Email 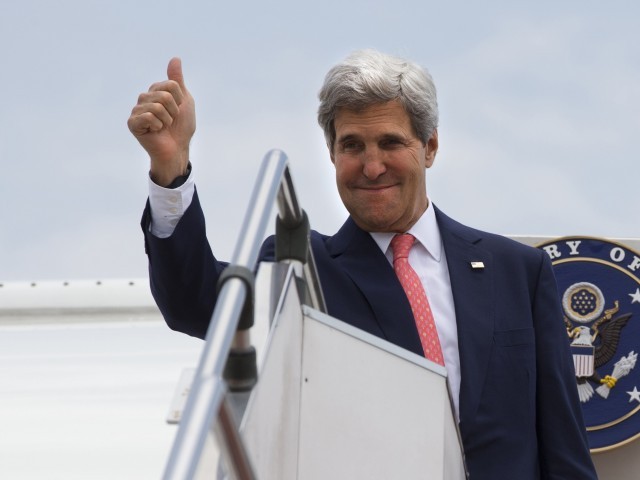 US Secretary of State John Kerry makes the thumbs up sign as he leaves, after completing his trip to Malaysia. PHOTO: REUTERS

KUALA LAMPUR: US Secretary of State John Kerry lauded Malaysia Friday as a modern, innovative and multi-faith model for the world, heaping praise on a country the United States regards as a valuable Muslim ally.

On the final day of a curtailed Asian tour in which he has filled in for President Barack Obama, Kerry said Malaysia’s young people were an inspiration for the Arab Spring.

“Here in Malaysia, people of different heritages have been in conversation for a long time,” Kerry said in a speech to mainly young entrepreneurs in the Malaysian capital of Kuala Lumpur.

“You see it in the open houses you host during holidays, welcoming people of different faiths into your living rooms.”

“Together, they… are a soaring reminder that Malaysia is much more than a marketplace. It is a human and economic mosaic – and it is a model for the world,” Kerry said.

He said those people struggling against authoritarian regimes in the Arab Spring had been inspired by young people such as in Malaysia, who had freedoms and abilities to fulfil their dreams.

“The world watched young people just like you – men and women with great aspirations just like yours – demand the chance to fashion their futures, just like you are doing today as you turn your dreams into businesses,” he said of the uprisings across many Arab countries.

Kerry had earlier met Malaysian Prime Minister Najib Razak, seeking to further build on warming bilateral ties at a time when US commitment to Asia is under fierce scrutiny.

However Kerry made no mention in his speech of tensions in Malaysia focused on special government treatment for the country’s Malay majority.

Muslim Malays and smaller indigenous groups – known as “bumiputra”, or “sons of the soil” – make up more than 60 percent of Malaysia’s 28 million people.

Under the ruling United Malays National Organisation (UMNO), bumiputra have enjoyed quotas in university placements, housing, and government jobs and contracts since the 1970s to prevent the ethnic Chinese from completely dominating the economy.

Chinese make up a quarter of the population. Ethnic Indians comprise about eight percent.

The policies are credited with helping create a Malay middle class and maintaining harmony despite tensions.

But critics say they have become a millstone in a competitive global economy and are abused by the Malay elite.

Mosque and school spark new feud between Turkey and Greece