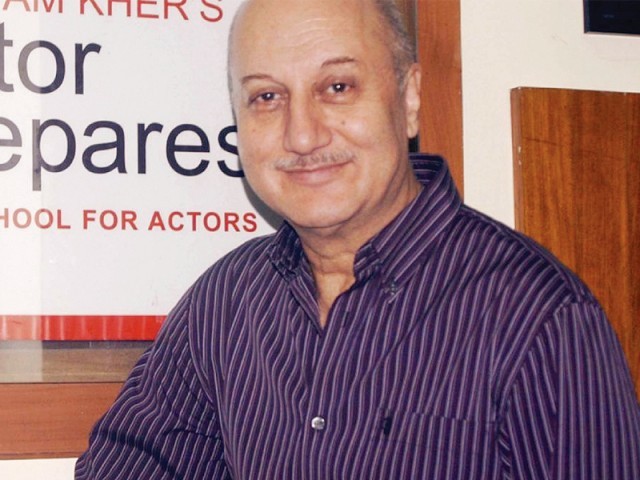 He says that reproducing emotions in front of the public requires work. PHOTO: FILE

NEW DEHLI: Veteran actor Anupam Kher maintains that while acting may come naturally to many, it is an art that needs to be ‘learnt’ and ‘practiced’.

He says that reproducing emotions in front of the public requires work, which is something that only acting schools teach. “Practice makes an actor excel. It is like cycling and motor driving. It is an art, which can be learnt and practiced,” Anupam told IANS in a phone interview from Mumbai. “You express all emotions in your daily life. An actor, who can act out these emotions for the public, needs to practice that,” he added.

Anupam owns and runs an acting academy named ‘Actor Prepares’, which has been included in a documentary series about incredible schools around the world. The series titled ‘Schools Like No Others’ will broadcast on TV5 in Canada next year. He also teaches acting as a lifestyle. “Our tag line says, ‘We bring out the actor in you’. In day-to-day life, our brain sends lots of signals. In acting, there are no signals. You have to believe in what you are trying to portray,” he said. He further added, “Our school not only makes you an actor, it makes you understand who you actually are as well… it gives you discipline and punctuality. It also teaches you a way of life”.

The actor is excited that his school has been discovered on its own. “The school, which I started eight years ago, for that to be recognised, is not only a great honour for me individually but also a great honour to the country… To achieve this in a short period of eight years is a great feeling,” Anupam said. “It was not like we sent any entry. They have discovered us on their own. They got in touch with us a few months back; at that time I had no idea who they were,” he said.

A versatile actor, Anupam has been seen in a mix of art-house and commercial films like Saraansh, Daddy, Karma, Darr, Dilwale Dulhania Le Jayenge and Maine Gandhi Ko Nahin Mara in Bollywood. He has also been a part of crossover projects like Bend It Like Beckham and Bride And Prejudice.

Recently, he was seen in Hollywood film Silver Linings Playbook, which stars Bradley Cooper and Jennifer Lawrence. The actor also featured in television thriller series, 24, the desi version of an American show by the same name. He firmly believes that series like 24 will spark off a new tradition of Indian modifications of international fiction shows. “Somebody has to take a risk and start that tradition. Others follow it. I am sure after 24, a lot of foreign fiction series will be made in India,” he said.