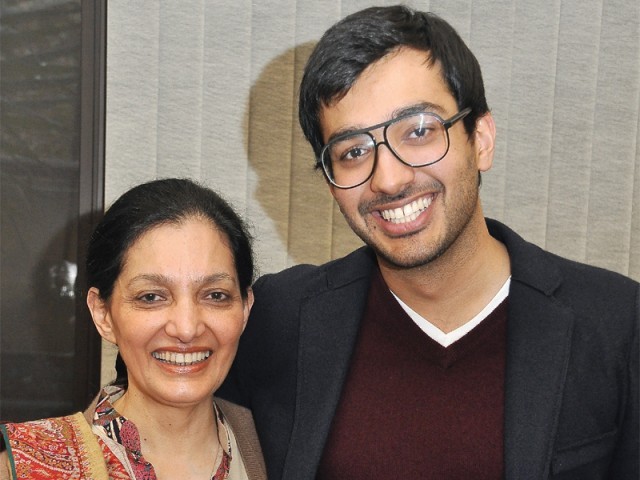 Seema, the brains behind Bareeze, with her son Zain. PHOTO: PUBLICITY

The air of simplicity and humility surrounding Seema Aziz as she sits in her office is humbling. There is no arrogance or sense of entitlement; the woman behind Bareezé and Care Foundation sits at a simple desk at her work space. Her crème-coloured embroidered shalwar kameez is crisp and her hair swept back in a nape-kissing bun. One would think a person of her stature would be at least a little affected, but Seema exudes an untouched professional elegance. She speaks with the confidence of a woman who has set up and ruled an empire. “At Bareezé, we have never looked at competition or market demands,” she says. “Our aim is to put out a high-quality product that is different from what is offered at market places. People automatically get hooked.”

Bareezé is one of the first brands to mark the inception of designer wear in Pakistan. The store revolutionised shopping for the Pakistani woman 28 years ago, when the idea of designer wear was still ripening. Seema took a leap of faith and introduced embellished fabric to the market. With a simple concept of retailing high-quality pure cotton, Bareezé became the first design house and retailer in Pakistan. Today, it has 12 brands under its umbrella.

“I would run around with a swatch of fabric, trying to recreate it,” Seema says about her early days, when traveling and scoping out the international market for trends.  She admits that it used to take some time to refashion the exact knot and weave, but Bareezé managed to get it at the end.

She talks about the time when she tried to introduce Swiss Lawn in Pakistan. “People said it would never work here, but I was determined to create it in-house and put it out in the market,” says Seema. “The moment the product hit the market, our racks were wiped clean and other retailers started coming out with their versions. Today, Swiss Lawn is one of the most worn fabrics during the summer.”

After Bareezé’s presence strengthened in the market, Seema’s search for fabric abroad came to an end. “Our capabilities are at par with the rest of the world and it was time that we created everything on our own and innovate fabric within the country.”

Another aspect that has led to the brand’s success is its manufacturing of raw materials in Pakistan. “People often tell me to outsource fabric and accessories from China. I ask them, what is it that the Chinese have that we don’t?” Seema says with pride. While some manufacturers lower costs by importing cheaper fabric from China, Bareezé believes in a trained workforce and with locally-manufactured material. “For us, quality lies in what is made in Pakistan and to ensure that we produce world class fabric in our factories.”

Towards the end of the meeting, Seema’s eyes shone as she excitedly explained her newest product line. “We are bringing out a ‘super exclusive’ range of fabrics,” she says. “For a while, I had not been able to create some of the things I really wanted to because the cost was too high, but now I have decided to the plunge and create an exclusive line which will be better than anything we have produced.” She cautions that the price will be much higher than the usual products sold at Bareezé.

Business runs in the family

Zain Aziz carried on the legacy of his mother’s empire, with the establishment of Bareezé Man. “We are very market-agnostic. Even though there is a trend of heavily embellished menswear, I thought it was time we revived the classic kurta,” says Zain. “Quality kurtas and sherwanis are no longer available off the rack. They either have too much embellishment or the cut is not flattering.” Ladies will all agree that men look best in finely-tailored kurtas whether it is for Eid, Friday prayers or a Mehndi.

Zain’s ideology encapsulates the creation of a lifestyle rather than just a brand. With a new line of western wear for men being designed, Bareezé Man is turning its sails towards creating a luxury design house for men.

Seema established Care Foundation in 1988, followed by the devastating floods in the Sheikhupura district of Punjab, which left most schools destroyed in the area. The foundation now manages and runs 200 schools, educating about 135,000 children, without taking grants or funds from foreign donors or the government.