The United Nation­s descri­bed the attack in Syria as the most signif­icant of its kind since Halabj­a.
By Reuters
Published: October 4, 2013
Tweet Email 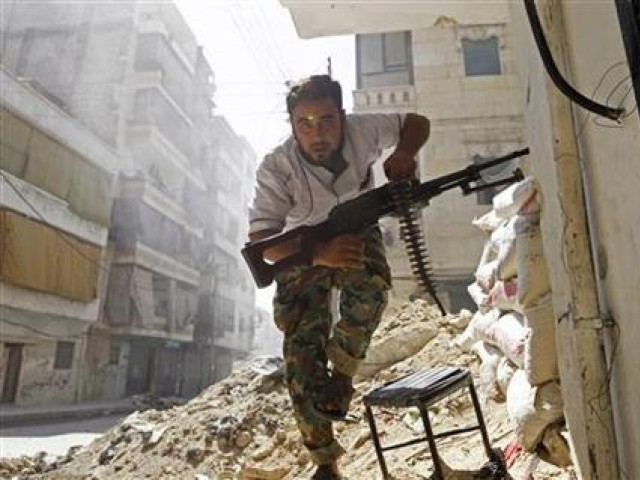 The United Nations described the attack in Syria as the most significant of its kind since Halabja. PHOTO: REUTERS/FILE

HALABJA, IRAQ: A sweet smell, like that of apples, wafted through the air. In a field, a cow’s eyes began to stream. A bird fell from the sky, its feathers singed, and people’s mouths began to fill with ulcers.

At least 5,000 people were gassed to death that spring day in 1988 when the Iraqi air force dropped chemical bombs on the town of Halabja in the country’s Kurdish north – a defining moment in a long history of oppression.

Survivors of that raid are reliving the horror following a sarin gas attack in a rebel-held suburb of Damascus in August that has also alarmed fellow Kurds in Syria.

International experts arrived in Damascus this week to begin the process of destroying President Bashar alAssad’s chemical arsenal, a problematic task in the middle of a war.

Kurds in both Syria and Iraq fear that Assad, unpunished for the poison gas attack, has been let off the hook, and that in the changing fortunes of Syria’s war, his chemical weapons could fall into the hands of insurgents.

“The wound of our town has been re-opened in Syria,” said Hamida Hassan Mohammed, visibly agitated as she recounted what happened in her home town 25 years ago. “We feel as though Halabja has been attacked again.”

Residents of Halabja took to the streets in protest against the August 21 chemical attack in Damascus, which the United States said killed more than 1,400 people and blamed on Assad, threatening air strikes to punish him. Syria denies responsibility.

That threat was deflected by a deal to eradicate Syria’s chemical weapons, which the UN Security Council adopted as a resolution that does not threaten automatic military action against Assad’s government if it does not comply.

Kurds in Iraq and Syria welcomed the initiative, but some regretted that air strikes against Assad had been averted.

“Halabja should be a lesson. If the Syrian regime isn’t held accountable, it sets a dangerous precedent,” said Abdelhakim Bashar, head of the Kurdistan Democratic Party in Syria.

“What we fear is that the agenda will change from removing the regime to removing its chemical weapons. That is a long-term project.”

The United Nations described the attack in Syria as the most significant of its kind since Halabja – which was the climax of a wider campaign known as Anfal during which thousands of Kurdish villages were razed, at least one million people forced from their homes and close to 200,000 killed.

In Halabja, which lies in a bowl of mountains on the border with Iran, a large monument in the shape of hands rises towards the sky in agony or supplication.

“You can still see the impact on the town and our bodies,” said Loqman Mohammed, the head of an association for the survivors of Halabja, standing amidst the rubble of a building wrecked by Iraqi bombardment.

“When my family and I saw the pictures (of the chemical attack in Syria) on TV, we wept because we feel their pain. The effects will reveal themselves in years to come.”

Halabja victims still suffer from the effects of the chemical attack, including respiratory difficulties, blindness and residual burns.

Town resident Hamida Hassan Mohammed emptied a whole plastic bag full of medicines on to the carpet as evidence of her continuing health problems.

Halabjans, whose plight went largely ignored by the international community, say Assad deserves the same fate as Saddam Hussein, who was behind the chemical attack on their town and was eventually put on trial and hanged in 2006, albeit for other crimes.

The Iraq war has been cited as a cautionary tale against intervention in Syria, but in Halabja and Kurdistan more widely, the US-led invasion that ended Saddam’s iron-fisted rule is remembered as a righteous endeavour.

Kurdistan is now prospering whilst insurgents wreak havoc in the rest of the country, joining forces with al Qaeda-linked militants in neighbouring Syria and striking on both sides of the border.

Iraqi Kurdish officials fear that Syria’s chemical weapons could fall into the militants’ hands. A rare bomb attack in the Kurdish capital Arbil last Sunday served as a reminder of the proximity of danger.

“Syria is close to Kurdistan, so we are worried about these chemicals being transferred to Iraq and used by terrorists here as well,” said Minister of Martyrs and Anfal Affairs Aram Mohammed. “This is a concern for us.”

Over the two and a half years since Assad first tried to quell the uprising against him, at least 200,000 Syrian refugees, most of them Kurds, have fled across the border to safety amongst their ethnic kin in Iraq.

Their flight perpetuates a history of persecution and displacement for Kurds, whose ambitions for statehood and ultimately a unified homeland have been thwarted by successive central governments in the four countries across which they are divided.

At a refugee camp on the outskirts of Arbil, a woman said the chemical attack in Damascus had immediately evoked memories of Iraqi Kurdistan’s past: “We were scared that something like Halabja would happen to us and we will all die.”

But there are other strong echoes of Iraqi Kurdish history in Syria, where Kurds are divided into two main factions that have at times found themselves on opposite sides of the conflict.

Kurds of all factions in Syria broadly agree on what they want – more rights and autonomy – but differ on the details and how to achieve it.

The dominant faction is the Democratic Union Party (PYD) and its armed wing, which has been fighting Arab rebels and militants who suspect the Kurds of wanting to secede. They are loyal to Abdullah Ocalan, although they deny having direct organisational links with his Kurdistan Workers’ Party.

The other faction comprises more than a dozen smaller parties that look to Iraqi Kurdish leader Masoud Barzani for patronage and are united against the PYD, which they accuse of trying to prevent them joining the uprising against Assad.

Several men at the camp said they were less concerned about being targeted by government forces than by the PYD, which they accuse of being in league with Assad and seeking to replace his authoritarian one-party rule with its own.

The rivalry recalls the civil war between the two main parties in Iraqi Kurdistan after the region won autonomy in 1991 that has left a lasting imprint on its politics.

“Who lost from that? Who gained from that?,” said PYD representative Jaafar Hanan, citing the civil war in Iraqi Kurdistan. “The Kurdish people lost their sons and golden opportunities.”