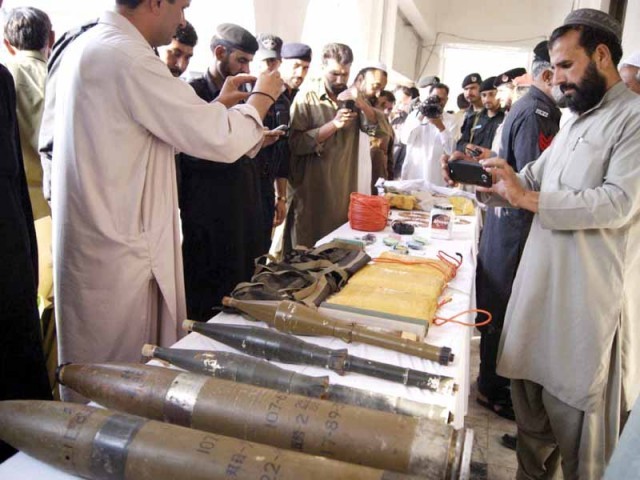 Police on Tuesday claimed to have foiled a bid to carry out terrorist attack in Abbottabad, as they apprehended three alleged attackers who were activists of a terror outfit. A huge cache of weapons was also recovered from their possession.

He disclosed that the accused were activists of Amaraat-e-Islami, an offshoot of Lashkar-e-Jhangvi, and were also involved in a bank heist of Rs9.7 million in Mansehra on August 2, 2013.

The DIG claimed the arrested terrorists had planned to hit military, police and civilian targets in Abbottabad.

While giving details of the arrest, Gandapur said police had seized a rocket launcher from two persons after a shootout where they managed to escape in the jungle, leaving behind a bag three days back. During the search of the bag the police recovered a telescope, a rocket launcher and mobile phone, investigations in the matter led the police and the intelligence agencies to a man named Farooq Ali, a resident of Dhamtor.

The detained accused told investigators that he was riding with Qari Saqib, also a resident of village Dhamtor, when police intercepted them.

The DIG said that the two accused confessed they have kept explosive devices and other materials at house of their accomplice Ashraf in village Mangal. Following their lead the police conducted a raid and arrested Ashraf, he said.