Calamity upon calamity: Fresh quake levels what the first spared

Calamity upon calamity: Fresh quake levels what the first spared 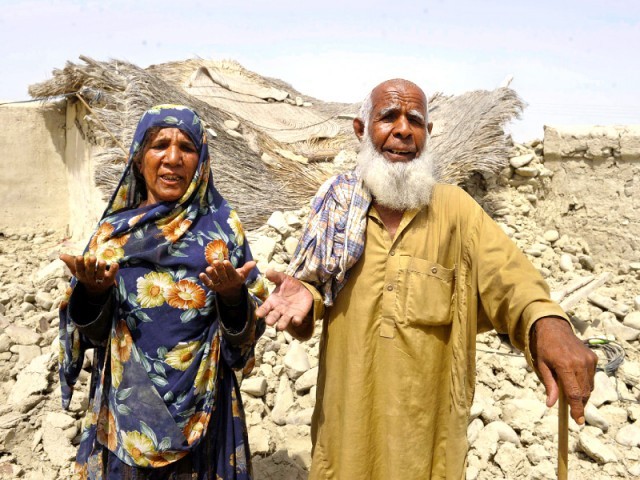 Survivors plead for help in front of their destroyed house in Awaran. PHOTO: AFP

The full scale of Tuesday’s earthquake disaster had scarcely begun to reveal itself on Saturday when another temblor rattled the luckless survivors and ravaged what was spared by the first.

The fresh quake wrought the most damage in the Mashkey area of Awaran – the district hardest hit by the Sept 24 disaster.

“Today’s earthquake flattened at least five major human settlements in Mashkey and its surrounding environs. At least 25 people have been killed and over 60 wounded – most of them critically,” Mir Naseer Mosiani, the assistant commissioner of Mashkey, told The Express Tribune. Awaran’s Deputy Commissioner Rashid Baloch also confirmed the death toll.

There were conflicting reports about the intensity of Saturday’s temblor: according to Pakistan’s Meteorological Department it measured 7.2 on the Richter scale, while the US Geological Survey put its intensity at 6.8. It struck 47 kilometres below the ground in the Gresha mountain range of Mashkey.

Mosiani identified the new settlements destroyed as Gajjar, Nok Jo, Jibri, Rind Goth, Shadozai and its neighbourhood. He feared that the casualty figure could rise as dozens of people are still trapped under the rubble of their collapsed mud houses.

“The new quake was more frightening than the first one. It was so powerful that it levelled several hills in the Gresha range,” Mosiani added. “We’re also getting reports from some areas where the earth cracked, swallowing entire human settlements.”

The temblor decimated the little infrastructure spared by Tuesday’s quake in the impoverished region. Dozens of natural springs – the only source of potable water for local residents – simply disappeared after the calamity, creating an acute water shortage.

Shehzad Baloch, a resident of Nok Jo, said his house – which had developed cracks in the first quake – was flattened on Saturday.

Relief aid is trickling into the devastated region — which is known to be the epicentre of Baloch insurgency in the volatile province. However, the rescue and relief operation couldn’t gather momentum due to sporadic clashes between the security forces and Baloch rebels and attacks on aid workers.

Irshad Baloch, who has set up a medical camp in the area, told The Express Tribune that his camp came under attack on Saturday. “Panicking attendants and survivors fled the area, leaving the critically injured in the camp,” he added.

Ilahi Bakhsh Baloch, who is leading a team of non-governmental volunteers, said that the survivors needed tents, food, water and medicines. He said that his team was not obstructed by anyone while moving to different areas and providing relief goods. “However, we are routinely questioned by the security forces at checkpoints dotting the region.”

Baloch feared the stinking corpses of a large number of household animals could cause the outbreak of epidemics in the area. His statement endorses reports that NGOs are defying an official ban to carry out relief effort.

Local journalist Shabbir Rakhshani told The Express Tribune trucks carrying relief goods started moving to remote areas four days after the catastrophe struck. The trucks remained parked outside the office of Awaran’s deputy commissioner for four days due to a dispute over who should control the relief operations.

“The local administration and the security forces are at odds with local residents. The security forces want full control of the relief operations,” a senior official told The Express Tribune on the condition of anonymity. “This is the main cause of delayed response.”

He confirmed that Chief Minister Dr Abdul Malik Baloch met with the representatives of NGOs to formulate a joint strategy for rescue and relief operations and the subsequent rehabilitation phase.

According to official sources, the chief minister has formed a committee of local tribal elders which will oversee the rehabilitation work. The chief minister promised that his administration would help the survivors to rebuild their homes.

Separately, the chief minister said he would remain in the quake-stricken region to personally supervise the relief operations. Speaking to a delegation of survivors in Awaran on Saturday, he said that the survivors would be sheltered until their houses were rebuilt. He also directed the administration to provide food, water and medicines to the affected people.

The villages that were