Civil societ­y member­s have been trying to get the chowk named after him.
By Hassan Naqvi
Published: September 29, 2013
Tweet Email 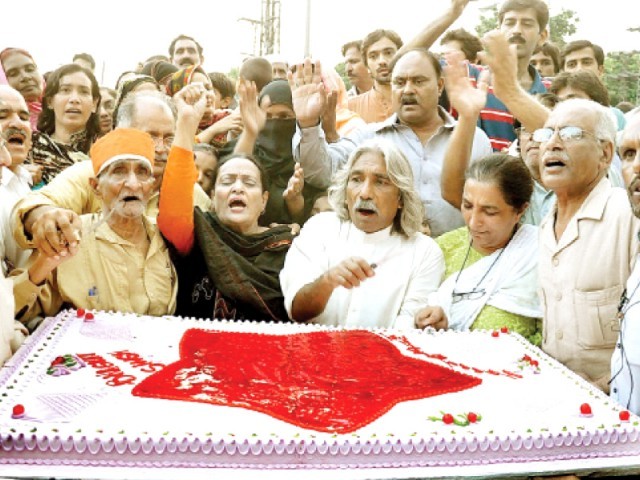 Civil society members have been trying to get the chowk named after him.

“Bhagat Singh gave his life for the cause of restoring power to the people…we need more people like him today,” Baba Najmi, a Punjabi poet, said at the celebration of Bhagat Singh’s 107th birthday at Shadman Chowk on Saturday.

They cut a cake and held a vigil in his memory chanting “We want freedom!” and “Freedom is our right”.

Writer Farrukh Sohail Goindi said Bhagat Singh’s birthday was an important event for the working classes of the Indo-Pak subcontinent. “Today we are fighting against the feudal system to establish a people’s democracy,” he said.

Abdullah Malik, another participant, said, “We want the government to name the Shadman Chowk after Bhagat Singh as a tribute to the great freedom fighter.”

The city government had decided to re-name Fawara Chowk to Bhaghat Singh Chowk in October 2012. The plan, however, was put on hold after the report of renaming drew objections and a group opposed to it held a protest demonstration.

Tehreek-i-Hurmat-i-Rasool member and Shadman traders’ Union president Zahid Butt challenged the move in the Lahore High Court. The court then restrained the city government from issuing an official notification in this regard. The hearing of the case has yet to conclude.

Bhagat Singh is an icon for the youth, said Samia Ali, a student at the Lahore School of Economics. “He taught the youth to fight for what was right without fear and to never give up,” she said, “This is why I came here today with my family…to pay tribute to the great shaheed.”

Bhagat Singh is an inspiration for the working classes, said Muhammad Abbas.

“Bhagat Singh was important in the movement against the British Raj. We want a similar revolution to establish a people’s democracy in which our rulers don’t play second fiddle to the whims of superpowers,” said Akbar Khan, a UET student.