If the US can open an office, why can’t we, asks Imran.
By Our Correspondents
Published: September 27, 2013
Tweet Email 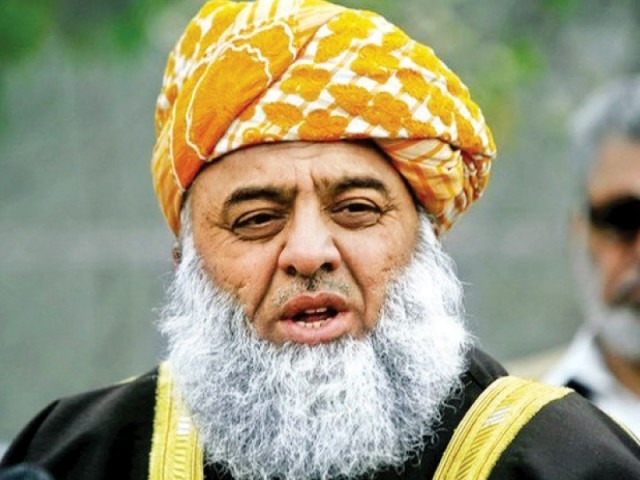 Fazl said that in order to pursue the peace dialogue between TTP, PTI’s recent suggestion urging the government to allow the umbrella militant organisation to open offices in the country was not feasible or productive.

Fazl was addressing the media at a national conference on “Participatory Federalism and Decentralisation” on Thursday.

The JUI-F chief said that there was absolutely no need for Taliban to open their offices.

On another suggestion made by PTI in the recent National Assembly session to review and amend the existing blasphemy law, Rehman said that the law was fine as it was, but issues regarding the misuse of the law must be addressed.

‘No danger in opening offices’

When the United States decided to hold talks with the Taliban, it facilitated the opening of their office in Qatar, then how is it dangerous if the Taliban open an office here for dialogue, Khan questioned rhetorically, drawing an analogy.

Talking to reporters after chairing a party meeting in Lahore on Thursday, he said that dialogue with the Taliban would be within the ambit of the Constitution. Going ahead with the talks was decided at the All Parties’ Conference, he said.

In the past, talks with Nek Muhammad were sabotaged by America with a drone strike in Bajaur agency.

Responding to a question on the fact that the TTP is an outlawed outfit and opening its office in Pakistan would give it legitimacy, Khan repeated that if America could allow a Taliban office to be opened, why is Pakistan reluctant?

“The government should not be compelled to open office for Taliban and start dialogue immediately,” he said talking to the media.

“We should rise above the petty politics of statements and come up with pragmatic solutions to the issue of extremism and militancy in the broader interest of the country,” he said referring to PTI chief’s statement demanding opening of an office for Taliban and starting dialogue process.

Separately, former law minister Babar Awan has said the government should seriously consider talks with Taliban and form a national Jirga for initiating the peace process.