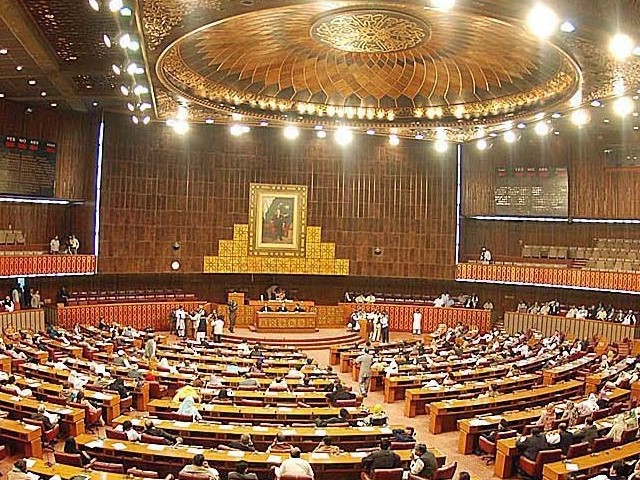 “The laws are being misused and I had also opposed the law in the past ," President PTI Makhdoom Javed Hashmi . PHOTO: APP/FILE

ISLAMABAD: The issue of misuse of the blasphemy laws was raised by the lawmakers in the National Assembly on Tuesday in the wake of Council of Islamic Ideology’s (CII) recommendations that the existing blasphemy laws did not require any amendments.

“The laws are being misused and I had also opposed the law in the past, violating the party discipline,” Makhdoom Javed Hashmi of the Pakistan Tehreek-e-Insaf (PTI) said while addressing the National Assembly.

He said several non-Muslims were languishing in jails due to the misuse of the existing laws as religion was being used by some to attain power. Reviewing the existing laws has become the need of the hour, he added.

Dr Shireen Mazari of PTI also supported his views and said Parliament should at least remove the lacunas, if any, from the existing blasphemy laws.

In response, Sahibzada Mohammad Yaqoob of the Jamat-e-Islami (JI) defended the blasphemy laws and asked Hashmi to move a bill seeking an amendment to the law or to approach the CII or the Federal Shariat Court.

Meanwhile, lawmakers from both sides of the isle condemned the Peshawar blasts and supported the government’s initiative of holding talks with the Taliban saying the attacks were aimed at sabotaging the peace process.

However, Jamshed Ahmed Dasti, an independent member of the lower house, had divergent views. “The Peshawar attack is a US conspiracy against Pakistan,” he said.

But there were several others who linked the Peshawar attack with Prime Minister’s visit to US and pointed fingers at hidden forces who they alleged do not want stability in Pakistan.

While justifying his views from the rest of the MPs, Dasti said “They got elected on party tickets and they cannot talk about anything against party policy. I am not answerable to any party leader, therefore, am free to say what I feel,” he added.

Dasti also demanded that DG ISI and army chief should also brief other members of this house as well and went on to say that the “APC was a fraud.”

During the debate several leaders including Prime Minister Nawaz Sharif, PTI chief Imran Khan and JUI-F chief Maulana Fazlur Rehman were absent. “I wish they were here at this moment,” said Mir Munawar Talpur of the PPP.

Supporting the dialogue process Hashmi lamented the Peshawar attacks saying “what have we made of this country where even places of worship are not secure.” Action should be taken against those who [Taliban] do not want to hold talks, he added.

Dr. Mazari said that the dialogue process will clearly distinguish those who were in favour of talks, and that an operation should be conducted against those not interested in negotiating.

Tariq Christopher Qaiser said that legislation should not be theocratic. “All Pakistanis should be given equal rights,” he said, adding that no culprits involved in the Church attack have been arrested as yet.

Minister for Ports and Shipping Kamran Michael said the attack was an attempt at sabotaging efforts for establishing peace. “These attempts should be discouraged,” he added.

Lal Chand said that there should be no discrimination with the minorities. He pointed out discrimination in the text of oath. “Why other religions are not taught in the school as children from minorities are bound to opt subject about ‘Ethics’ or go for Islamiat,” he questioned rhetorically.

Man sent into custody for harassing girl on Facebook