Calls on the govern­ment to bring the perpet­rators to justic­e.
By APP
Published: September 23, 2013
Tweet Email 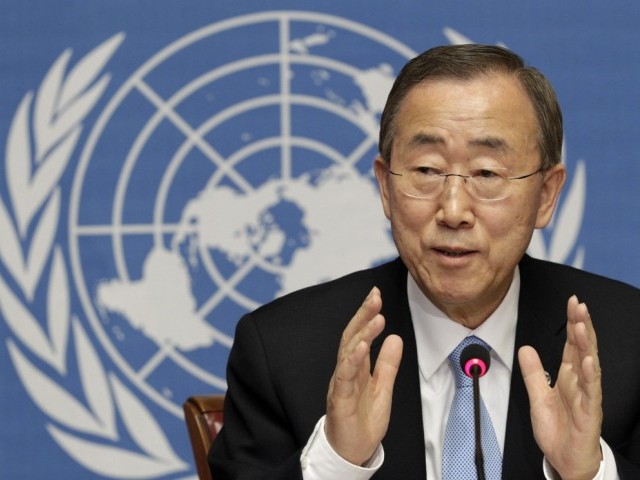 UNITED NATIONS: UN Secretary General Ban Ki-moon strongly condemned Sunday’s “atrocious” terrorist attack on a church in Peshawar and called on the government to bring the perpetrators to justice.

A statement issued by UN Spokesman Martin Nesirky said that the secretary general was “appalled” by the attack, which had reportedly killed more than 75 people and wounded over 100 others as they were attending Sunday mass.

“The secretary general condemns this atrocious bombing attack in the strongest possible terms,” the statement said.

The secretary general said these acts of terror cannot be justified by any cause, and urged the government “to do everything possible to find and bring the perpetrators to justice”.

“The secretary general extends his heartfelt condolences to the families of the victims, the people and Government of Pakistan.”

He reiterated the solidarity of the United Nations with the government’s ongoing struggle against terrorism and extremism and urges the government to continue taking steps to build tolerance and strengthen relationships between diverse religious and ethnic communities in the country,” the statement added.

Peshawar blast protests: Churches of Pakistan say no to rioting