And some of our politi­cians believ­e we should be talkin­g to these people?
By Editorial
Published: September 22, 2013
Tweet Email 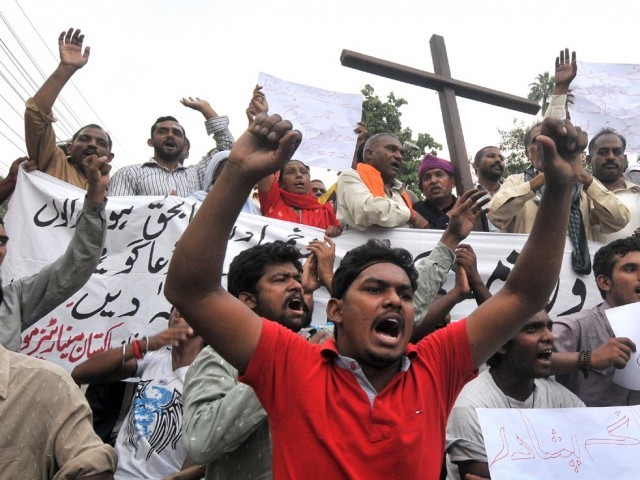 There can be no justification for this, no prevarication, no semi-sincere regrets. PHOTO: AFP

It was the softest of targets. A Christian church in Peshawar, which with a dreadful tragic irony had been built to resemble a mosque as a gesture of interfaith harmony. The congregation had just said Mass and was leaving the church, which was packed with men, women, and children, when the two suicide bombers rushed towards the throng and detonated themselves; one inside the church the other outside after having been stopped by police. Body parts of both have been recovered for forensic examination. By 4 pm on the  afternoon of September 22, it was being reported that there were 60 dead and 120 injured, with the number of dead set to rise as many are said to be mortally wounded. Protests are being held in Karachi, Lahore, Multan and Faisalabad. The carnage had not been claimed by any group by late afternoon.

Given the tardiness of politicians to respond to acts of terrorism in the recent past, they moved this time with considerable swiftness. Leaders of all parties deplored the killing and the president and the prime minister were forthright in their condemnation. Assorted dignitaries Tweeted their shock and disgust and there appears to be some unanimity in collective abhorrence at what may be the largest mass-murder of Christians since the massacre at a church in Bahawalpur in 2000. The chief minister of Punjab has convened a meeting to discuss the incident on September 23 and it must be assumed that the chief minister of K-P will be doing the same though it has yet to be announced.

There can be no justification for this, no prevarication, no semi-sincere regrets. Over 200 innocent people worshipping as is their right under the Constitution have had their lives blighted by bigots and murderers. Those who did this are in all likelihood allied to those who last week killed two senior army officers in the Swat valley. And some of our politicians believe we should be talking to these people? We suggest they take a reading of the mood of the general public and if they do, they may find that talking is not uppermost in the minds of most at this time.