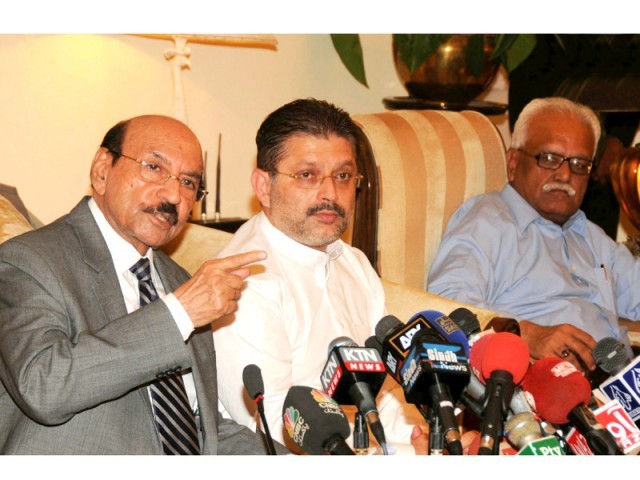 Sindh Chief Minister Qaim Ali Shah has said the law and order situation in Karachi has improved by 20-25% after the targeted operation by the Rangers and police commenced.

Addressing a press conference at the CM House on Saturday, Shah said the operation against kidnappers, extortionists, target killers and terrorists would continue until complete peace is restored in Karachi.

“The operation is not being carried out against any specific party or group. Our main target is the criminal elements, and the government will take action against them irrespective of political affiliation,” he said.

He said the operation was commenced on the demand of political parties and the people of Karachi, and it is heading toward the logical end.

“The major stakeholders, including the business community and Muttahida Qaumi Movement (MQM), have expressed satisfaction over the ongoing operation which has brought back normalcy to the city,” he said, adding that if MQM had some reservations about the operation, it would not have withdrawn the adjournment and privilege motions submitted on the law and order in Karachi.

“Not only the police but the Rangers, too, update me on the operation every 12 hours. I compile the reports and analyse the law and order situation,” said Shah.

Sharing statistics regarding the operation, the CM said that police had conducted around 1,619 raids and arrested 2,069 suspects, out of which around 400 suspects had only been arrested by the Rangers.

“Eleven suspects have been arrested on charges of extortion, 16 on kidnapping for ransom, 11 for being involved in terrorist activities and 37 on targetted killing.”

He said that 18 suspects had been killed in encounters and the police had recovered 284 weapons.

“During investigations, arrested culprits have revealed important information that would be shared with the media at an appropriate time,” he said.

“The government will increase the number of anti-terrorism courts from 14 to 20 and the cases of all slain police personnel would be registered under the ATC Act,” Shah said.

He said around 142 cops were killed by terrorists this year. “We are trying to comply with the Supreme Court and constitute a committee to reopen the cases of the police officers who have been killed,” he said.

Shah revealed that one of the important witnesses of Geo TV reports that the Wali Babar case was still alive and the government had kept his identify under wraps to protect him.

“In order to record his statement, this person will be presented in the court under a special escort,” he said, adding that the provincial government had passed the witness protection law and would make it sure to implement the law in letter and spirit.

When asked about the ‘shoot at sight’ orders given to the Rangers, Shah said that his government was reviewing the decision before implementing it in Sindh.

“It is a tough decision which might result in violation of fundamental rights. But there are also Supreme Court’s remarks under which the police and the paramilitary personnel can shoot the suspects in defence,” he said.

About the case registered against the MQM Member of the National Assembly, Nabil Gabol, the CM said an FIR had been lodged on the request of the victim’s family and the police would start an impartial inquiry into the matter.

“An FIR does not mean that a person has been convicted; we released the former MQM MPA Nadeem Hashmi after investigation when he was not found involved in murder cases. The police will investigate into Nabil Gabol’s case on merit,” he reassured.