If there is one film you must watch this year, Zinda Bhaag is it.
By Rafay Mahmood
Published: September 19, 2013
Tweet Email 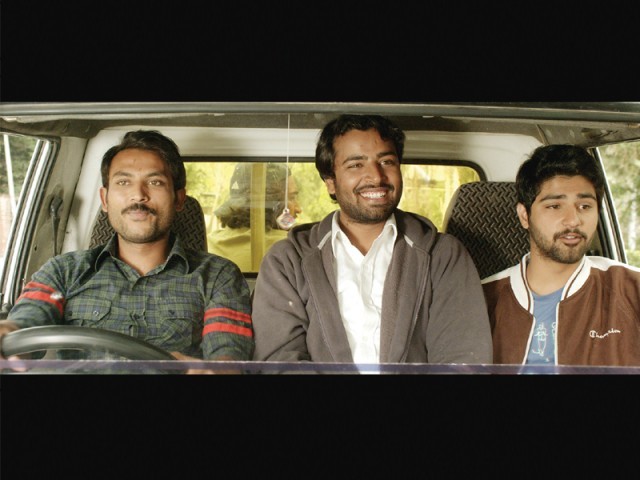 The movie beautifully captures the essence of Lahore, in ways that other productions have not. PHOTO: FILE

In one scene of the film, an illegal ‘immigration expert’ is surgically recreating a passport for a man who is desperate to get out. He meticulously uses tweezers to peel off one passport picture and then replaces it with another. His hands are steady; after all, the consequences of getting caught are too frightening. This single act encapsulates the theme of Zinda Bhaag — a depiction of the essence of the ‘Pakistani dream’ as we know it today.

In the heart of a lower-middle class neighbourhood in Lahore, friends Khaldi (Khurram Patras), Taambi (Zohib) and Chitta (Salman Ahmed Khan) are living life to the fullest; they eat, drink and make merry. They look for love, get their hearts broken, and tease each other like any tightly-knit group of old friends would. Naseerudin Shah as Pehlvan is less of the mohalla’s ‘social worker’, and more the Godfather figure. He is introduced to us when he walks into the funeral of Booba, one of the residents of the area, who had managed to escape to France by hiding in a container. He eventually started his own restaurant called La Booba, so he became an inspiration to youngsters in the mohalla. The scene shows the obsession the residents of the neighbourhood have with finding success in foreign lands.

In Zinda Bhaag, the film’s directors Meenu Gaur and Farjad Nabi manage to create a culturally accurate story world, while taking a limited amount of screen time. The naturally raw Lahori accent; the corny humour; a family’s obsession with Urdu soaps and the yearning of the boys to make an appearance at a funeral just to get a taste of free mutton qorma are examples of an apt cultural representation that Pakistani films fail to achieve.

A pleasant combination of traditional cinema shots and snappy cinematography captures both, the soul of Lahore and the essence of a neorealist saga.

The visuals are supported by a light hearted yet unsettling story with back to back powerful one-liners that keep you glued to your seats and leave you craving for more.

Shah as Pehlvan has a larger-than-life persona, but also relates the ghosts of his past. Despite donning funky pink kurtas and wearing multi-coloured rings, there is a menacing darkness to Pehlvan, without whose blessings, it seems you cannot make it big in the mohalla. His proficiency in Punjabi is as immaculate as his fluency in Urdu. Khaldi, Taambi and Chitta are newcomers turned method actors. Their comfort in the atmosphere created by ZB plays a seminal role in making them believable. Bringing in non-actors was a smart choice, and an even smarter one to edit their shots well-enough to prevent their naivety from being translated on screen. That shouldn’t, however, take away from the well-performed long takes. Editing is the backbone of any film but very few (especially in Pakistan) have used it effectively, and it’s the clever cutting of the shots, along with tight pacing that keeps the audience of ZB wanting more.

The songs are good, but they sometimes become a needless deviation from a very precise plot, preventing Zinda Bhaag from being considered perfect. One wonders whether the powerful words penned by Mohammad Hanif in Dekhainge deserved something better than a half-hearted retaliation and a whole-hearted celebratory dance by a bunch of socially suppressed waiters.

The problems for Zinda Bhaag start as soon as Khaldi meets his love interest Rubina (Amna Ilyas), a petite, animated girl who sells a homemade soap called Facelook. While the humour surrounding her character is refreshing, it has hardly any contribution to the narrative. She doesn’t serve the purpose of eye candy, nor is she a good actor. More than that, her dialogue delivery is monotonous and she has a limited range of expressions on screen. Shoots and the ramp, it seems, are better places for Amna.

All in all, Zinda Bhaag stylistically highlights one of the most central social issues faced by Pakistanis — the issue of survival. Those who can run away will, but only after accumulating adequate resources. Others dream of running away, even if it means putting all their resources at stake.

Verdict: Zinda Bhaag is a must watch. In its modest, yet ingenious approach towards storytelling, Zinda Bhaag easily becomes the best film to have come out of modern day Pakistani cinema.

Get The Look: Stealing the Lamha