Cleric says the Afghan Taliba­n's one-eyed leader is a simple man, not an aggres­sor.
By Reuters
Published: September 15, 2013
Tweet Email 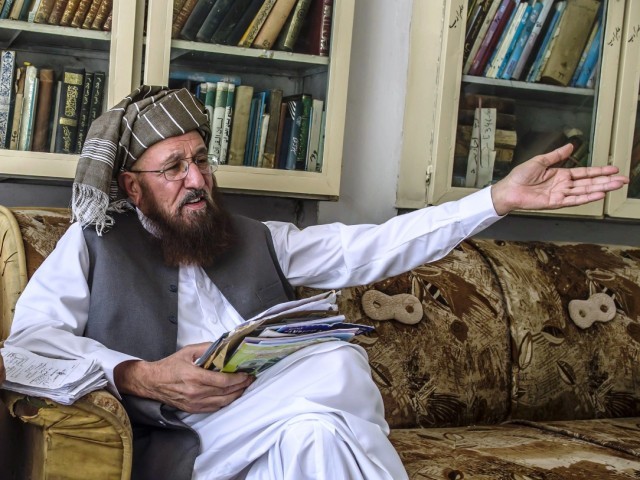 Maulana Samiul Haq , a cleric and head of Darul Uloom Haqqania, a seminary and alma mater of several Taliban leaders, talks during an interview with Reuters at his house in Akora Khattak, Khyber Pakhtunkhwa province September 14, 2013. PHOTO: REUTERS

AKORA KHATTAK: He is known as the Father of the Taliban, a cleric who calls the Taliban’s one-eyed leader an “angel” and runs a seminary described as the University of Jihad.

Bespectacled and soft-spoken, Maulana Samiul Haq is a revered figure in Pakistan and Afghanistan whose views carry enormous weight among the Taliban on both sides of the border.

Tucked away in a dusty town off the main motorway to the Afghan border, his Darul Uloom Haqqania university was the launching pad for the Taliban movement in the 1990s and is still often described as the incubator for radical fighters.

Speaking to Reuters at the sprawling campus near his native town of Akora Khattak, Haq did little to hide his sympathies for the Taliban, a word meaning “students” in Pashto. He said he was sure the Taliban would soon sweep back to power in Afghanistan.

Despite Haq’s openly pro-Taliban views and connections, his seminary is recognised officially in Pakistan – a symptom of Islamabad’s long-running duality over the Taliban issue.

Haq would not talk about this publicly but he is believed to be close to the security forces – a legacy of an era when Pakistan sponsored movements and supported fighters, including Osama bin Laden, against Soviet troops in Afghanistan.

Back in the 1980s, many young Darul Uloom Haqqania graduates swapped books for guns and drove west along the highway running just outside its iron gates towards Afghanistan, where they joined groups to fight against the Russians.

One of them, Mullah Mohammed Omar, later took advantage of the chaos that followed the Soviet withdrawal in 1989 to found the Taliban movement – a period often recalled with nervousness ahead of next year’s drawdown of US forces from Afghanistan.

Omar is now believed to be hiding somewhere in Pakistan’s tribal regions on the Afghan border.

Haq’s face brightened as he recalled Omar, one of his bests students, but laughed when asked about his whereabouts.

“He is a devout Muslim, very virtuous. He is hospitable. He is a very simple man, with no princely tastes,” Haq said, alternating between Urdu and Pashto.

“He is very intelligent. He understands politics and is wise to the tricks of outsiders.”

Haq added with conviction: “He is no aggressor. He is an angel-like human being.”

The seminary, founded in 1947, is now one of biggest and most respected Islamic institutions in South Asia. It propagates a hard-line curriculum based on the Deobandi strain of Sunni Islam.

Fenced off from the hustle and bustle of the outside world by high walls and barbed wire, it houses 4,000 male students in its multi-storey concrete buildings.

Haq says he and his seminary have nothing to do with terrorism. He has even offered to mediate between the United States and militants in order to bring peace to Afghanistan.

Haq, who speaks fluent Arabic, said the US ambassador to Pakistan visited him in July to discuss the situation in the region but added that peace was not possible as long as foreign troops were still in Afghanistan.

“As long as they are there, Afghans will have to fight for their freedom,” Haq said. “It’s a war for freedom. It will not stop until outsiders leave.”

The Taliban were initially popular among Afghans after years of Soviet brutality and the ensuing anarchy of feuding warlords. But that quickly changed after they seized power and enforced puritanical restrictions on all spheres of people’s lives.

After years of war there are hopes that the Taliban might be coaxed to the negotiating table or even turned into a political movement with the help of influential mediators such as Haq.

But would the Taliban still listen to him?

“They are my students. In our tradition, a teacher is like a father, like a spiritual leader,” Haq said. “Afghans should be allowed to fight for their freedom. Foreign powers should get out and let them do what they want.”

Do you always have to give up your dream job for a more stable income? No.