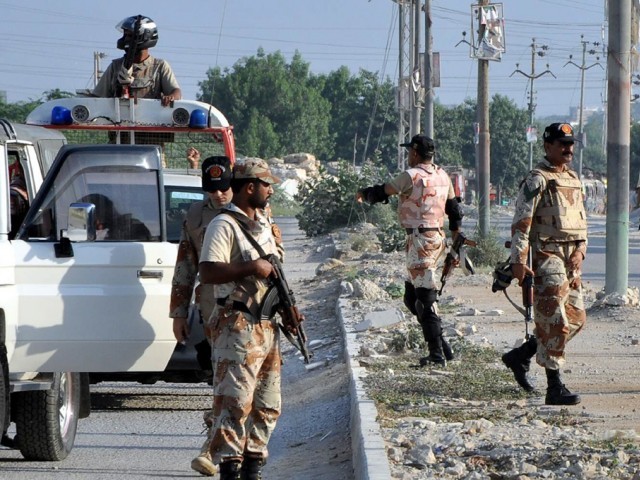 According to Sindh home department officials, the paramilitary force will only conduct targeted raids against suspected criminals, and investigation and prosecution will remain under the domain of the police. PHOTO: IRFAN ALI/EXPRESS

The Rangers have refused to accept the powers of investigation and prosecution in the wake of the ongoing operation to purge Karachi of criminal elements, The Express Tribune has learnt.

According to Sindh home department officials, the paramilitary force will only conduct targeted raids against suspected criminals, and investigation and prosecution will remain under the domain of the police.

“Though it was decided to enhance the powers of the Rangers in the special cabinet meeting [last week], the force is now willing to restrict itself to the targeted operation against criminals. The police will retain the powers of investigation and prosecution,” Additional Home Department Chief Secretary Syed Mumtaz Ali Shah told The Express Tribune on Friday.

Clarifying the mode of operation, he said the Rangers would move the suspects arrested in any raid to the respective focal police station for that particular area. He added that the police will then lodge an FIR against the suspects before handing them over to the joint investigation team – which will comprise officials from the Rangers, Military Intelligence, Inter-Services Intelligence and the Intelligence Bureau. The investigation officer in each case would be a police officer, however, Shah said.

Sources in the home department said the decision to deny Rangers the powers of investigation and prosecution was taken since the paramilitary force has no expertise in those areas. Providing further details on the set-up for the targeted operation, they said the in-charge of each of the five focal police stations in Karachi would belong to the police department.

“On the Rangers’ recommendation, a senior police officer will be appointed as the in-charge of each focal police station which is to be considered the central point in terms of operation and investigation being conducted in an entire district,” a home department official said.

“These officers will play a lead role in investigation and prosecution… No one will transfer these police officers without permission from the Rangers,” he added.

Meanwhile, additional secretary Shah said the government has also approved the notification for setting up the five focal police stations in Karachi for the operation, which will be issued in a couple of days.

On the other hand, a Rangers spokesperson neither confirmed nor denied whether a decision to deny the force the powers of investigation and prosecution had been made.

“I have no idea about this decision… the targeted operation against criminals is continuing without any discrimination,” he said when contacted.

Last week, while briefing the media after the cabinet meeting at the Governor House in Karachi, Interior Minister Chaudhry Nisar Ali Khan had said the government wanted to give the Rangers the lead role in the targeted operation in Karachi, and as such had decided to give them the powers of prosecution and investigation on the request of the Rangers director general.

He also announced that a committee had been formed under federal minister Zahid Hamid Khan to work out a law in this regard.

However, Sindh advocate general Khalid Jawed Khan on Friday said no such legislation was currently being considered by the provincial government.

“The committee has held its meeting on this issue… It is expected that an amendment will be made regarding preventive detention and bail reform,” he said. The advocate general added that the government was considering how to amend the law so that notorious criminals and terrorists could not be easily bailed or acquitted.

“We have also been asked to work on a witness protection bill,” he told The Express Tribune.