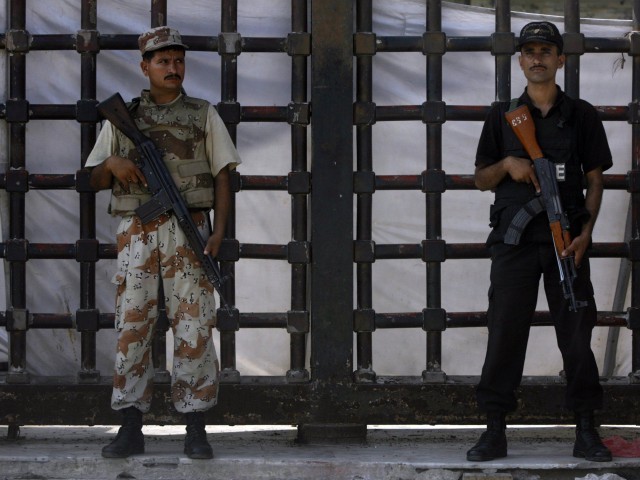 Security officials stand guard at the main entrance of the Abdullah Shah Ghazi shrine a day after it was hit by multiple suicide blasts. PHOTO: REUTERS

ISLAMABAD: Officials investigating Thursday’s suicide bombings at the shrine of Abdullah Shah Ghazi have found clues indicating the involvement of an al Qaeda-affiliated jihadi-sectarian nexus in the attack, according to the government.

“One of the two bombers who blew themselves up at the entrance of the Barelvi mausoleum, killing eight people, was from the tribal areas,” Interior Minister Rehman Malik told the National Assembly here on Friday.

“He was from South Waziristan and belonged to the Mehsud tribe,” Malik said in a speech to the house while wrapping up a debate on Nato helicopter gunship incursions  into tribal districts.

Separately, an official of the city police intelligence agency said that the initial probe suggested that the attacks might have been carried out by the Lashkar-e-Jhangvi (LeJ) and the banned Tehreek-e-Taliban Pakistan (TTP).

“It has the typical jihadi and sectarian signature all over it and is similar to the blasts at the shrine of Data Ali Hajveri in Lahore,” said the official, who requested that his name not be mentioned as he was not authorised to share information with the media.

“More such attacks are expected and we are already on our toes,” the official added in a statement that could send a wave of panic through the country’s largest city. A spokesperson for TTP, a group dominated by Mehsud tribesmen from South Waziristan tribal region, immediately claimed responsibility for the attack.

Deobandi Islam, a hard-line school of thought, which the Taliban and the LeJ believe in, does not endorse visits to shrines and considers such activities to be un-Islamic.

Malik said that by attacking places associated with mystic Barelvi Islam; these groups want to trigger a Deobandi-Barelvi war similar to the Shia-Sunni conflict.

He said that the government law enforcement and intelligence agencies were capable enough to foil their plots. “These are hard times; we are facing internal and external challenges and need national cohesion,” Malik added.

Malik reiterated that the government was resolved to defend its borders and that it would not tolerate any future incursions.

“An apology is fine. But there must be no more incursions in the future. We do not want this to be repeated. The Pakistani nation and its armed forces are fully capable of defending the country,” he said.

“The whole nation has taken the matter very seriously and so has the government. The attacks were taken as an affront to our sovereignty and the government is clear and sure about what to do in response to such aerial strikes,” he added. “Our defence forces are capable of defending our sovereignty.”

Earlier, Aftab Ahmed Sherpao, Rehman’s predecessor, said that Nato forces had made 24 strikes inside Pakistan in what he described as ‘a manifestation of US the defeat in Afghanistan’.

The opposition Pakistan Muslim League-Nawaz (PML-N) continued its boycott for the second day running as the house was prorogued.