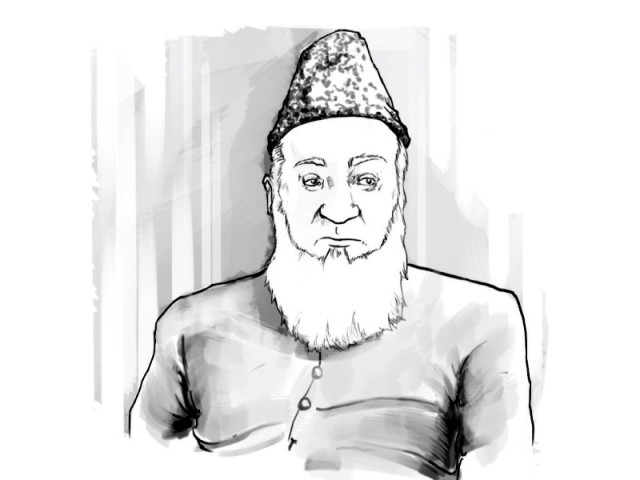 I H Rashid spent his life fighting against the suppression of the press. SKETCH: JAMAL KHURSHID

Syed Irshad Hussain Rashid – more commonly known as I H Rashid – breathed his last on August 8 of this year.

During his funeral in Lahore, it was of no surprise that many in attendance were those journalists whose rights he campaigned for throughout his life.

“I H Rashid’s actions spoke louder than his words. He struggled for the betterment of the journalist community,” remembers Nasim Ahmed, former chief editor of Pakistan Times and a colleague of Rashid. “He was a visionary and it seems difficult that the gap he has left behind will be filled in the years to come. We need journalists like him today – selfless journalists who want to work for their community, not for their personal interests.”

Indeed, the freedom of expression enjoyed by the media is, in large part, due to the efforts of senior journalists like Rashid and his colleagues, including Nisar Osmani, Minhaj Burna, and I A Rehman.

Making of the man

Rashid was, in many ways, an enigma – with the appearance of a religious scholar, and the mind of a social scientist, he commanded English newsrooms for decades.

He saw firsthand the suppression of journalists, which continued after independence in 1947. Episodes of this censorship were certainly not few and far between – in 1948, literary publication Naqoosh was halted simply for carrying Sadat Hassan Manto’s famous short story Khol do, Saweera’s editor Zaheer Kashmiri was arrested on orders of the Punjab government, and journalist Fazal Ahmad Ghazi from Quetta was also arrested in the same year.

Finally, when Daily Evening Times Karachi editor Z A Sulehri, publisher Khurshid Alam and cartoonist N M Katpal were arrested on charges of sedition in 1952, the Pakistan Federal Union of Journalists (PFUJ) staged nationwide protests. This was when Rashid commenced his career, from the Daily Ehsan in Lahore, and played an active part in these demonstrations.

These early instances had a great impact on him and would continue to shape his professional leanings in years to come.

Up close and political

“Rashid never feared those in the power corridors,” recalls Ahmed. “He was the strong supporter of the democratic form of government and led the movements against the dictatorial regimes of Ayub Khan and General Ziaul Haq.”

His struggle for a free press did not stop there. When Ziaul Haq took power from the PPP, imposed martial law, and arrested Mussawat’s editor S G M Badruddin, the PFUJ took to the streets once again. This time, the crackdown was brutal. On May 13, 1978, four journalists -Masoodullah Khan, Khawar Naeem Hashmi, Iqbal Jafri and Nasir Zaidi – were lashed. Rashid, along with Osmani, Burna, Aziz Sidiqi, Shafqat Tanveer Mirza, Hafeez Raqib, Badarul Islam Butt, Abdul Hameed Chapra and Aurang Zeb, was imprisoned for a year.

The year 1983 witnessed something historic: 50 journalists and intellectuals in Punjab released a statement in favour of the Movement for the Restoration of Democracy (MRD) and demanded to stop brutality in Sindh. Promptly, all these signatories were declared traitors by Ziaul Haq, especially Rashid, as he worked for Progressive Papers Limited Pakistan Times, which was controlled by the government. He was asked to apologize, but he refused. Thus, he was forced to resign.